Getting started at auction 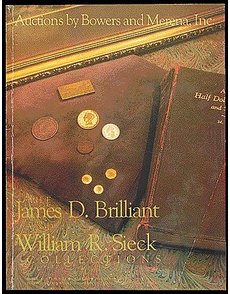 A 1992 auction featuring the James D. Brilliant Collection was one of the author’s first major forays into bidding at public auctions. The author’s inexperience in the field resulted in him being shut out in bidding.

One of my first articles, in April 2000, dealt with the benchmark auction of the Woody Blevins Collection of Capped Bust half dollars. This was the first sale that highlighted the Overton rarities, cataloged in Early Half Dollar Varieties: 1794-1836 by Al C. Overton and Donald Parsley.

In this column, I would like to go back to January 1992 and the Bowers and Merena auction of the James D. Brilliant collection.

This was one of my first major auctions of Capped Bust half dollars, and I was shut out in bidding! Why? It was too early in my collecting career, and my knowledge of the marketplace was lacking. The rare die marriages did not have an established auction record and I lacked the experience to realize the value of the rare die marriages.

Interestingly, many of the scarce die marriages in lower grades at the auction turned out to be not very good buys.

The Bust halves began with the famous 1807 Draped Bust, Large Stars, Bearded Goddess half dollar, Overton 111b, in Very Fine 20, selling for $1,210, which included the 10 percent buyer’s fee.