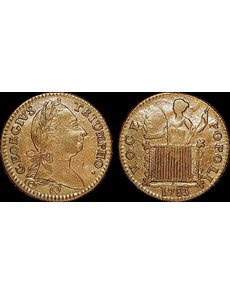 This high-grade 1783 Washington Georgivs Triumpho token represents a piece that still holds tightly some of its secrets.

Coin from the Roger Siboni Collection.

In a letter published in the Oct. 10 issue of Coin World, Andrew W. Pollock III opined that the reverse motif of the 1783-dated Georgivs Triumpho token might actually show a balloon gondola, with the Miss Liberty (?) figure standing in a basket with corners having fleur de lys ornaments.

“Numismatist John Pack suggested to me that the reverse motif may represent America’s aspirations for independence being buoyed aloft by means of assistance received from French military allies,” Pollock continued.

Certain features, including the date numerals, seem to indicate the dies for it were engraved by the same person who created the 1783 Nova Constellatio copper variety Crosby 1-A (Early Coins of America by Sylvester S. Crosby). Struck at a private mint in Birmingham, England, 1783 and 1785 Nova Constellatio coppers were imported into the United States in quantity, where they became a familiar sight in commerce.

Today, the Georgivs Triumpho token holds several mysteries. The new Pollock idea about the hot air balloon seems to have merit. America was indeed grateful to Marquis de Lafayette and other Frenchmen who helped the Continental Army to victory. Paris was the center of aerial activity, at first with tethered hot-air balloons, and then on Dec. 14, 1783, the first free flight was made in a craft constructed in 1782 by the Montgolfier brothers.

The first such flight in America took place on Jan. 10, 1793, when Jean-Pierre Blanchard went aloft in Philadelphia as thousands watched, including President George Washington. Blanchard reached a height of about 5,800 feet and landed safely in Gloucester County, N.J.

Another mystery is the obverse portrait. It doesn’t resemble the George Washington we know. That may be easily explained by the British engraver lacking a portrait to work from, as Washington’s image was not widely distributed until later.

The Voltaire medal of Washington, made in France in 1789, had a fictitious portrait for the same reason. Depicted on the Georgivs Triumpho token is a laureate victor who some have suggested resembles George III of England as “George Triumphant.” However, as the British George was not victorious in 1783 (the year the peace treaty was signed), and as the reverse is not evocative of satire, I think we can rest easy in the knowledge that our George was intended.

Another puzzle is the fact that no choice Mint State pieces exist, or if they do, I haven’t seen one. The typical grade is apt to be Very Fine or Extremely Fine.