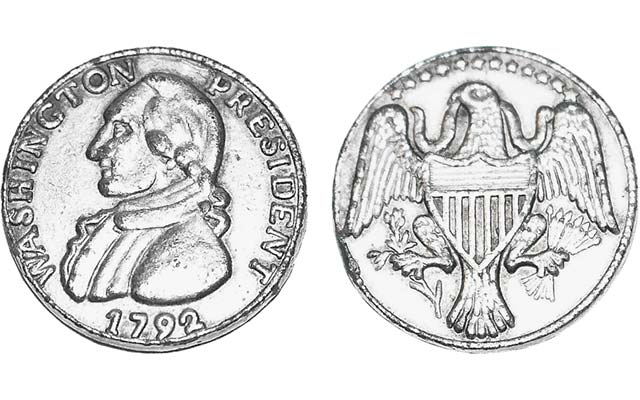 The metallic political item featuring George Washington is likely a cast replica since it exhibits a seam on the edge.

In the 1970s, I was a political campaign pin collector. My wife was at a yard sale and found a coin that she thought might be political in nature. It features George Washington. When she brought it home, I knew it was not a political pin, but I thanked her just the same. Over the years, the nature of the coin has intrigued me. It resembles coins in your magazine, but not exactly.

It is made of metal and weighs approximately 18 grams. On the obverse, it has only 12 stars, not 13 like pictured in your magazine. It appears to have been painted with a silver paint and in places where the paint has chipped, the metal is dark underneath. It was suggested to me that this is a replica coin. I am not sure that someone would mint something like this out of metal as a replica. I am looking to someone with a vast knowledge of coins to see if I can solve my mystery.

From the images the reader sent, it was pretty easy to confirm that the Washington piece is, indeed, a replica. Still, I checked with a Colonial numismatics expert, who also concurred.

The replica appears to be a crude attempt to replicate the 1792 WASHINGTON PRESIDENT, Eagle With Stars Reverse cent.

The piece was not likely produced with the intent to deceive, since the designs are so roughly copied. Who might have produced it and when is anybody’s guess, since no manufacturing hallmarks are stamped on the piece anywhere.

In a follow-up email, the reader mentions the piece is 1.25 inches in diameter, larger than a small dollar. He also notes a seam is visible on the edge. A seam is an instant indicator the piece was cast, the seam being from extra metal that flowed out into the tiny gap between the two die molds.

It isn’t unusual to find such pieces produced as a novelty or even a souvenir. It was probably meant to be a replica, possible to be sold as a souvenir. Inexpensive metals are commonly used for reproducing multiples of an item at low cost to the manufacturer.