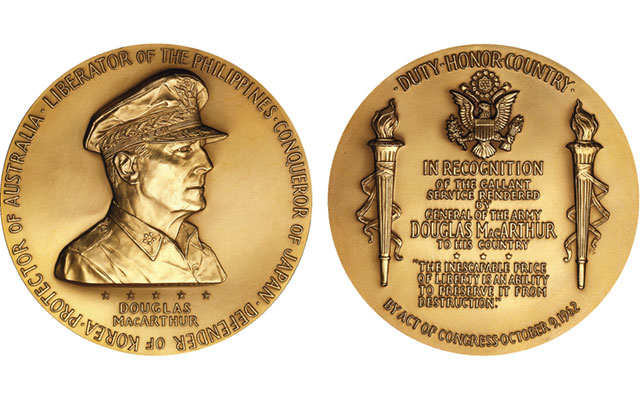 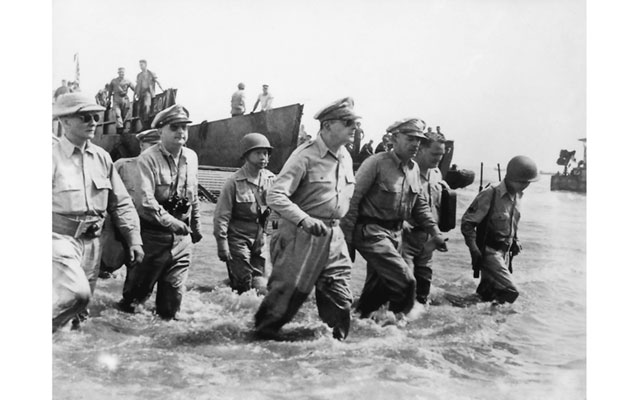 This is the fifth in a series of articles on congressional gold medals struck by the U.S. Mint:

The obverse of the MacArthur medal features a three-quarters left portrait. Aligned in the field below the portrait are five five-pointed stars, with DOUGLAS / MACARTHUR below the stars.

Inscribed around the border is • LIBERATOR OF THE PHILIPPINES • CONQUEROR OF JAPAN • DEFENDER OF KOREA • PROTECTOR OF AUSTRALIA.

The reverse features, inscribed at top, • DUTY • HONOR • COUNTRY • above the great seal. Inscribed in the center, flanked by ribbon-draped torches, is IN RECOGNITION / OF THE GALLANT / SERVICE RENDERED / BY / GENERAL OF THE ARMY / DOUGLAS MACARTHUR / TO HIS COUNTRY / * * * / “THE INESCAPABLE PRICE / OF LIBERTY IS AN ABILITY / TO PRESERVE IT FROM / DESTRUCTION.

Inscribed along the bottom border is BY ACT OF CONGRESS•OCTOBER 9, 1962.

Collectors may encounter bronze duplicates of the MacArthur medal originally sold by the Mint in 1962, but the designs were resurrected in 2013 for production of a 1.5-inch bronze medal, for inclusion in a special commemorative set.

The use of the MacArthur medal made the special set more affordable than if the MacArthur $5 gold coin had been included. The Proof gold coin was offered individually at $429.75 and the Uncirculated version at $424.75.