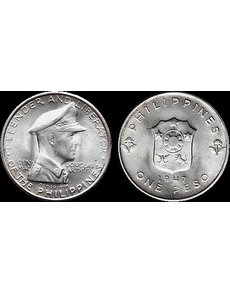 In 1947 the Philippines issued a 1-peso coin, shown, and a 50-centavo coin, both struck at the San Francisco Mint, to honor Gen. Douglas MacArthur, who commanded forces that defended and liberated the nation in World War II.

This isn’t the first time the general has appeared on U.S.-struck coins, though, is it?

Gen. Douglas MacArthur famously exclaimed “I shall return” upon leaving the Philippines during World War II, heading to Australia after the Japanese invasion of the island chain. Gen. MacArthur made a triumphant return later in the war during the Oct. 20, 1944, invasion of Leyte.

After the war, he made his debut on two silver coins of the Philippines, a .750 fine 50-centavo piece and .900 fine peso issued in 1947 commemorating his importance as commander of the forces that defended and liberated the islands.

The two coins were not issued by the United States, but they were struck at the San Francisco Mint and bear a design by famed sculptor Laura Gardin Fraser.

The coins were little noted in contemporaneous hobby literature, as Richard Giedroyc found when exploring the topic for Coin World (Dec. 22, 1997, issue).

The Numismatist lists the coins in new coin issues without comment in 1948.

The entry on Page 52 of Annual Report of the Director of the Mint for 1948 merely acknowledges 100,000 1-peso and 200,000 50-centavo coins struck for the Philippines without mentioning the coins were commemorative or were struck at San Francisco.

The Gen. Douglas MacArthur Foundation sells examples of the 50-centavo coin from 1947 (as well as 3.125-inch diameter bronze duplicates of the 1962 congressional gold medal presented to MacArthur) through its gift shop. World and U.S. coin dealers often have the 1947 coins for sale, with the 1-peso coin recently available from one dealer for about $30 and the 50-centavo coin for about $20.