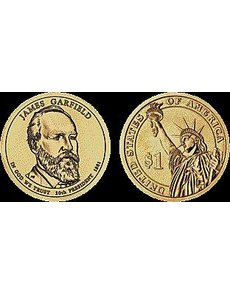 The 2011 James A. Garfield Presidential dollar was the last Presidential dollar struck for circulation at the Denver and Philadelphia Mints before Treasury Secretary Timothy F. Geithner suspended dollar coin production Dec. 13. All future circulation-quality dollars struck will be reserved for numismatic sales only.

“Consistent with the Presidential $1 Coin Act, those who would like to obtain future Presidential $1 Coins can purchase them directly from the U.S. Mint during specified periods,” according to a statement released Dec. 14 from the U.S. Mint by Mint spokesman Michael White. “Prices and shipping costs for future $1 Coins will be announced in the near future and will be set at a level that ensures that they do not result in a cost to taxpayers.”

Presidential dollars have been available in roll and box options directly from the Mint for those customers unable to obtain them from banks at face value.

Dollar coins needed to satisfy circulation demand will come from the vaults of the Federal Reserve Banks and their contracted armored carriers where 1.4 billion Presidential dollars currently reside. Federal Reserve and Treasury officials state that the existing inventory of dollar coins is sufficient to satisfy circulation demand for the next 10 to 12 years without additional production of the coins.

Government studies forecast that Presidential dollar coin surpluses would climb to 2 billion coins by 2016, the last year of the program, if production continued unabated.

Wolin said it is estimated that suspending dollar coin production will save $50 million to $70 million annually.

Although the Federal Reserve’s inventory of Presidential dollars is well above what is needed for circulation purposes, some collectors across the country have found it difficult to obtain the coins at face value, especially if their local banks did not order them directly from the Federal Reserve. Native American dollars have been made available only through the Mint, either as a numismatic product or as part of the Direct Ship Program.

Both dollar series have been available for acquisition directly from the Mint.

Individual $25 face value rolls of 25 Presidential and Native American dollars were being offered as of Dec. 15 at $39.95 per roll, plus shipping, as part of the Mint’s regular product offerings.

Coins from both programs have also been available in larger quantities from the Mint through its Direct Ship Program, though the Mint recently raised the cost of the coins to consumers. Starting Nov. 15, the U.S. Mint imposed a $12.95 shipping and handling fee on $250 face value boxes of rolled Presidential dollars and Native American dollars. Prior to Nov. 15, the boxes were offered at face value, with the U.S. Mint absorbing the shipping costs, in order to get more dollar coins into circulation.

From the 2007 George Washington dollar through the 2011 James Garfield coin, Federal Reserve member banks have been able to order the latest Presidential dollar during a time period starting at three weeks before the coin’s release until two weeks after its release. Until these provisions, banks had to order the coins in $1,000 face value boxes of rolled coins.

Treasury Department spokesman Matthew Anderson said no decision has been made as to whether the official launch ceremonies associated with the release of each Presidential dollar into circulation will continue.

Anderson said the $50 million to $70 million in savings represents strictly production costs associated with the Presidential dollars. While the Mint profits on the production of each coin through seigniorage — the difference between the face value of the coin (the price at which the Mint sells the coins to the Federal Reserve) and the cost to produce it — those totals are negated by shipping and storage costs for the coins, according to Anderson.

The U.S. Mint’s latest cost to produce a manganese-brass clad Presidential dollar is 32 cents, according to White.

Anderson said Treasury officials are also looking at potential cost savings associated with the production of Lincoln copper-plated zinc cents and Jefferson copper-nickel 5-cent coins, both of which cost at or more than face value to produce. ¦