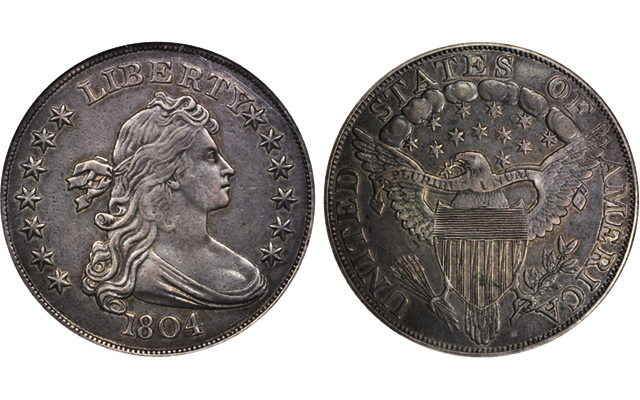 The coin is graded and encapsulated Proof 55 by Numismatic Guaranty Corp.

The Garrett example, according to Stack’s Bowers, was acquired by T. Harrison Garrett in 1883 and remained in the Garrett family until 1942, when it passed from the estate of John Work Garrett to Johns Hopkins University.

The coin changed hands several times over the ensuing years before appearing as lot 1736 in the Auctions by Bowers and Merena Inc. June 23 to 25, 1986, sale of the Harry Einstein Collection. It sold for $187,000.

At that point, it entered the collection of Mrs. Laura Sommer, where it resided for decades before Stack’s Bowers Galleries negotiated its sale to the current owner who consigned the coin for the Aug. 8, 2014, auction.

The record price for any Class III 1804 Draped Bust dollar at auction is the $2.3 million realized for the Adams-Carter specimen in Heritage’s April 30, 2009, sale. The Professional Coin Grading Service Proof 58 example is the highest-graded piece in collector hands.

While U.S. Mint records suggest 19,570 silver dollars were produced at the U.S. Mint in Philadelphia in 1804, no documentation exists that any of those strikes were dated 1804. Because it was common practice to continue to use dies until they broke or wore out, it is believed that any silver dollar production from calendar year 1804 bore earlier dates, though that, too, is conjecture.

The 1804 Draped Bust dollar traces its genesis to Nov. 11, 1834, when diplomatic presentation coin sets were requested through the Department of State for delivery to the King of Siam and the Sultan of Muscat.

Those denominations comprised the half cent, cent, half dime, dime, quarter dollar, half dollar, gold $2.50 quarter eagle, and gold $5 half eagle.

According to Stack’s Bowers, regular Proof coins dated 1834 were made of each of these denominations.

In preparing the sets, “a search of Mint records revealed that two other denominations were authorized, but had not been struck for many years,” according to Stack’s Bowers. “Silver dollars had been last struck in 1804 and $10 gold eagles were last struck in 1804 as well.

“Although the coiners of the Mint had on hand an 1804 $10 gold coin, which would later become a part of the Mint Cabinet, they had no way of knowing that the silver dollars minted in 1804 were of earlier dates,” according to the auction firm.

Stack’s Bowers added: “Seeking to present coins that were historically accurate, the engraver and coiner at the Mint simply made up new silver dollar and $10 gold [eagle] dies bearing the 1804 date, to illustrate these coins of yesteryear, thought to have been made, but for which no specimens were on hand. For the first time, 1804-dated silver dollars were struck.”

In addition to the pieces struck in about 1834, additional 1804 dollars were struck decades later to fill collector demand for the coins once their existence became public.

The result of this later production was that two different reverse dies would be mated with the same obverse to execute the 1804 Draped Bust dollar production.

The Class I examples, of which eight pieces are known, were struck with a reverse die with the E in STATES over a cloud.

The reverse die for Class II and III examples position the E in STATES above a juncture of two clouds.

According to numismatic researchers, the small but growing numismatic community had become aware of the 1804 dollars and their rarity by at least 1842, though their origin was not understood. That was the year Adam Eckfeldt and William E. DuBois published the Manual of Coins of All Nations, including an illustration of an 1804 silver dollar.

The first private American collector to obtain an example was Matthew A. Stickney, who traded for his coin with the Mint in 1843, giving the Mint a gold Immune Columbia piece and other items in exchange.