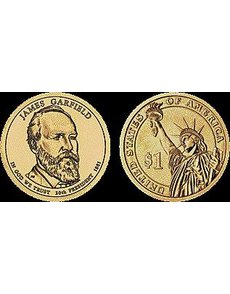 The 2011 James Garfield Presidential dollar is to be released into circulation Nov. 17 during an official launch ceremony at the president’s Mentor, Ohio, home.

Collectors will have their first in-person opportunity to acquire 25-coin rolls of the 2011 James Garfield Presidential dollar Nov. 17 when the U.S. Mint stages its official coin launch ceremony at Garfield’s Mentor, Ohio, home.

The ceremony is to be held at Garfield’s home, known as Lawnfield, and the James A. Garfield National Historic Site, which is maintained under the jurisdiction of the National Park Service. The property is located at 8095 Mentor Ave. in Mentor.

The 10 a.m. Garfield dollar launch ceremony will be followed by a roll exchange during which cash can be exchanged for rolls of Uncirculated, circulation-quality 2011-P Garfield dollars. There will be a two-roll limit placed on the first pass through the roll exchange line. Cardinal Community Credit Union is supervising the exchange.

Those attending the ceremony who are aged 18 and under will each receive a Garfield dollar free.

The same day as the dollar coin launch in Mentor, Ohio, the U.S. Mint will place on sale specially wrapped $25 rolls of circulation-quality 2011-P and 2011-D Garfield dollars struck respectively at the Philadelphia and Denver Mints. The rolls will be offered at premiums above the face value of the coins they contain.

Garfield, elected in 1880 as the 20th president of the United States, was one of seven politicians to be elected president born in the state of Ohio. Garfield was also the second of four presidents to be assassinated while in office.

The obverse of the Garfield dollar was designed and sculptured by U.S. Mint Medallic Sculptor Phebe Hemphill. ¦