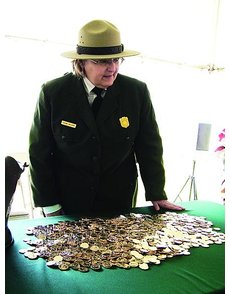 Sherda Williams, superintendent of the James A. Garfield National Historic Site in Mentor, Ohio, looks at hundreds of Garfield Presidential dollars after the “coin pour” near the conclusion of the coin launch ceremony at the Historic Site on Nov. 17. 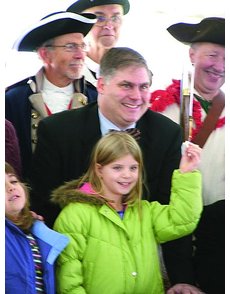 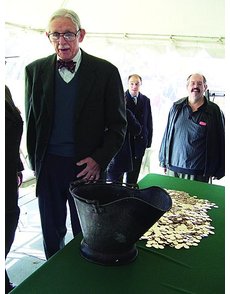 Rudolph H. Garfield, left, great-grandson of President James A. Garfield, was a participant in the Garfield Presidential $1 Coin Launch on Nov. 17 in Mentor, Ohio. 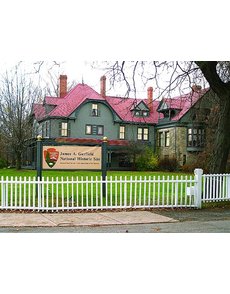 The James A. Garfield National Historic Site in Mentor, Ohio, was the site of the Garfield Presidential dollar launch on Nov. 17. 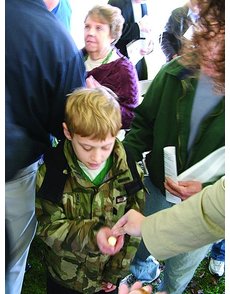 As is tradition at Presidential dollar launches, children under the age of 18 attending the Nov. 17 ceremony received James A. Garfield Presidential dollars. Genevieve Billia of the U.S. Mint in Washington, D.C., hands a child one of the coins.

The bow ties were worn in the late president’s honor by members of Garfield’s family who traveled from near and far for the unveiling of the 20th Presidential dollar coin in crisp late autumn sunshine.

“My father always wore a bow tie,” said Garfield’s great-grandson, 83-year-old Rudolph Garfield, of Cleveland Heights, Ohio, who spoke during the coin launch on behalf of his family. “It goes back generations.”

The Garfield family was among several hundred people crowded into a heated tent erected on the expansive north lawn of the Garfield National Historic Site to watch history in the making two days shy of Garfield’s 180th birthday.

Following a succession of speakers, including Garfield, acting Associate Director for Manufacturing at the U.S. Mint J. Marc Landry described the nation’s 20th president — the last one born in a log cabin — as a self-made man, the perfect example of a leader who helped shape our country’s values and character.

Then he poured from a small black bucket about 500 shiny Garfield Presidential coins.

The culmination of the hour-long coin launch, the “coin pour” has become a tradition of Presidential dollar launches since they began in 2007 with the first coin honoring George Washington.

That the Nov. 17 event was the 20th such dollar coin launch made it no less special for the guests or the presenters. Federal, state and local dignitaries took turns at the podium. The historic site’s chief of interpretation and education, Todd Arrington, served as emcee.

“We feel it’s an honor to be stewards of this historic site. To see Garfield recognized this way as a president is wonderful,” noted Sherda Williams, historic site manager, who decided to erect the tent after realizing that the site’s 40-seat auditorium would never accommodate such a large crowd. “President Garfield was a wonderful person. It’s a tragedy his life was cut short.”

Lightheartedly referred to as “the oldest Garfield we know” by Arrington, Rudolph Garfield told the crowd that he visits the site for almost every occasion it hosts, and that he was honored to attend the coin launch at a site where he and his cousins cultivated happy memories. Garfield family members participated in many coin launch planning meetings.

“I take the liberty on behalf of the family, in absentia, of thanking those who produced this coin,” Garfield said.

Then keynote speaker Dr. Allan Peskin, professor emeritus of Cleveland State University and author of the definitive Garfield biography, Garfield, made believers out of anyone who doubted that a president in office just 220 days — 80 of them on his deathbed — should be entitled to a Presidential coin.

“Is Garfield entitled to this?” he asked, in his speech, “Is Garfield Worth A Dollar? Reflections on the Man and the Coin.”

“He was shot six months into office. The House of Representatives was not in session at the time, and no legislation could be proposed or passed. One of his appointees to public office led to a struggle that threatened the Republican Party. In fact, some referred to him as a ‘cipher,’ something echoed by subsequent historians. He was never going to be sculpted on Mt. Rushmore, and some might have thought that a silver dime might be a more fitting memorial,” Peskin said.

But Peskin said that Garfield was not about to be “short-changed.”

“It’s true that he had meager accomplishments, but in those days, Americans did not expect their presidents to make a difference in their lives. They just expected them to keep things moving,” he said. “Most Americans, including Garfield, had a suspicion of centralized power, and just wanted the government to ‘keep the peace.’ ”

Peskin said the man who was president in an era when the federal government touched citizens’ only via mail, land sales and meager taxes collected through customs’ duties had a tremendous impact on ordinary citizens.

Born in a log cabin in northeast Ohio, raised and supported by a widowed mother, self-educated to become a preacher and president of Hiram College in his 20s, a man who raised a Civil War regiment and became the Union’s youngest major general, then went on to Congress to become master of financial legislation, Garfield became the Republican Party’s presidential nominee in 1880 after it became deadlocked.

Peskin said that Garfield did much of his campaigning on the front porch of his Mentor home, and, “noting his warmth,” 80 percent of the registered voters participated in the 1880s election.

“A needle could scarcely find space between him and his Democratic rival,” he added.

Less than six months into office, on July 2, 1881, Garfield was shot. When he died two months later, Peskin said the outpouring of mourners was significant. Some 100,000 Clevelanders witnessed the final rites.

“Why, if he were an ‘insignificant’ president?” Peskin asked.

“His is a remarkable story,” he concluded. “His life story burned into their consciousness. He wove the symbols of home, mother, school, church, flag to remind his countrymen of the highest aspirations. It was a comfort that traditional values could bring success. He mastered new challenges, and when he died, Americans mourned the best of themselves.”

Before leaving the podium, Peskin offered one piece of advice.

“Don’t stuff the coin in your pocket. Hold it in your hand as a symbol of simpler days, the American Dream,” he said.

In commemoration of Garfield’s 180th birthday on Nov. 19, a 12.5-mile hike took place from Garfield’s birthplace to his resting place at Cleveland’s Lakeview Cemetery. A Garfield Coin Show was held at the Radisson Hotel in neighboring Eastlake.

Following the Nov. 17 program, attendees were invited to refreshments and tours of the Garfield home. Though visitors were invited to trade Federal Reserve notes for new Garfield coins in $25 rolls, those seeking coins in smaller quantities had to wait until the next day to trade in their currency at a local credit union.

Genevieve Billia, of the U.S. Mint, who passed out the coins to children 18 and under, said the Mint is proceeding with plans to produce four more coins in 2012, honoring the 21st through 24th presidents, starting with Grover Cleveland, despite a bill introduced to end the minting of the coins by those who assert they are a waste of money.

Indeed, Peskin said that Garfield would have been delighted to be honored by the Presidential dollar coin.

“It wasn’t that he wanted his face on a coin, because he was free of vanity,” he said. “It was because he considered paperbacks, or ‘greenbacks,’ as lies of the government, and he labored to make them redeemable in specie. This is a fitting tribute to that struggle.” ¦