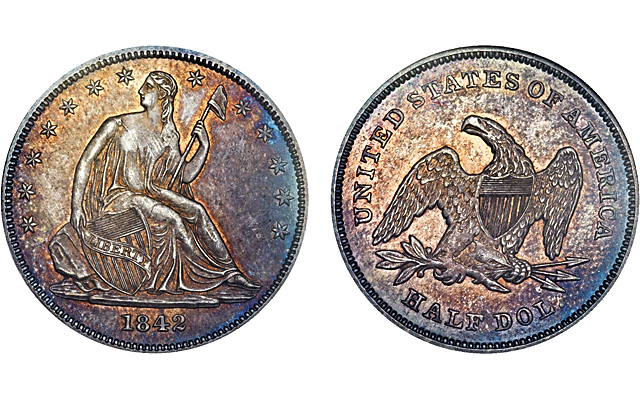 The type was unknown until 18 years after the 1993 publication of Complete Guide to Liberty Seated Half Dollars by Randy Wiley and Bill Bugert; hence, it is unlisted in the reference.

The type pairs the Small Date obverse with the Small Letters reverse design, also known as the “Reverse of 1839.”

The finest known of the four examples, graded Mint State 64 by Professional Coin Grading Service, is one of 636 lots to be offered June 23 in New York by Heritage Auctions. The sale is the first of four auctions dedicated to the Eugene H. Gardner Collection of U.S. Coins.

Heritage reported the identification of the type on April 4, 2001, with three more examples discovered since.

Gardner, 78, a collector from Pennsylvania, spent more than two decades assembling what some numismatists regard as one of the finest ever collections of American silver coins.

Now, he’s relinquishing ownership of his more than 3,000 coins to a new collecting generation, in four auctions in New York in 2014 and 2015.

The June 23 sale is scheduled to be held at the Ukrainian Institute of America at the Fletcher-Sinclair Mansion, 2 E. 79th St., in New York City.

The second auction in 2014 is expected to be held sometime in October.