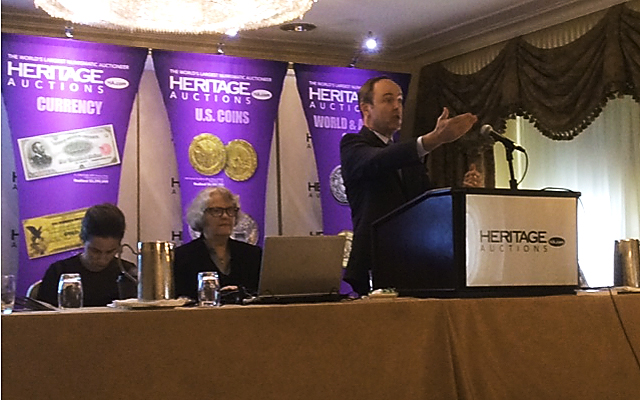 Heritage auctioneer Mike Sadler calls the action during the May 12 Gardner Collection auction. 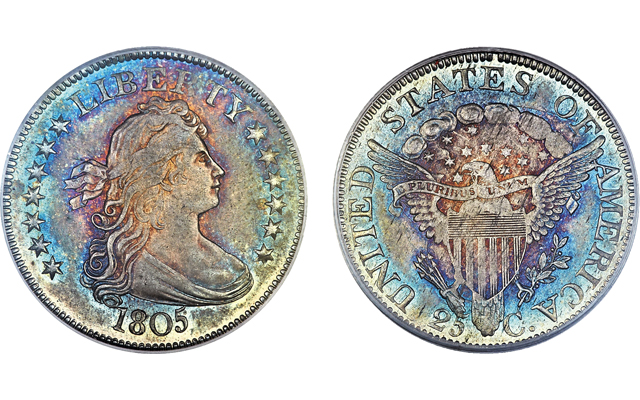 A beautifully toned 1805 Draped Bust quarter dollar graded MS-64 by PCGS with a green CAC sticker sold for $70,500 at Heritage’s May 12 Gardner auction.

Heritage’s third auction of Pennsylvania collector Gene Gardner’s collection of U.S. coins brought $13,787,486 in New York City on May 12. The firm’s president, Greg Rohan, said after the auction that the total exceeded Heritage’s pre-sale estimate of $10 million to $12 million.

Many of the coins in Gardner’s collection showcased spectacular toning, including a run of Capped Bust and Seated Liberty Proof coins, some of which were purchased from Heritage’s November 2013 auction of Eric P. Newman’s collections.

Gardner had a preference for beautifully toned coins, such as an 1805 Draped Bust quarter dollar graded Mint State 64 by Professional Coin Grading Service with a green Certified Acceptance Corp. sticker. The catalog described the rich color as “splendid cobalt-blue and mint-green rim patina encircles interiors tinged in heather and rose,” and the piece, which was formerly in the collection of the Museum of Connecticut History, sold for $70,500.

To help put that price into perspective, an 1805 quarter dollar of a different (and scarcer) variety graded MS-64+ by Numismatic Guaranty Corp. with a green CAC sticker sold for $49,937.50 at Heritage’s Nov. 15, 2013, Newman auction. Newman’s example had a more typically seen gray and gold patina.