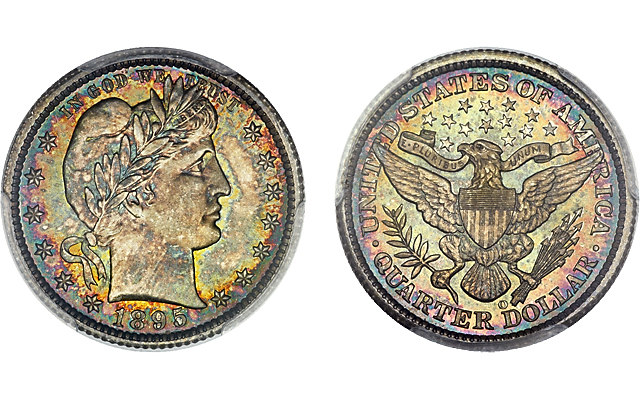 Heritage’s auction of the Eugene H. Gardner Collection on June 23 and 24 brought nearly $20 million and was highlighted by hundreds of popular collector coins in high grades. Many of these silver coins were characterized by beautiful toning that resulted in rich kaleidoscopes of color.

Among the series that Gardner collected in depth were Charles E. Barber’s quarter dollars of 1892 to 1916. Coin World is highlighting three examples that combined spectacular color and rarity.

Below is the second.

The story: The 1895-O Barber quarter dollar has a relatively high mintage of more than 2.8 million pieces, but few have survived in grades of Mint State 68 and finer. This is the sole finest certified example at both PCGS and Numismatic Guaranty Corp., and Heritage notes that there is no serious competitor that could snatch the title of finest known from this coin.

Like Gardner’s 1901-S quarter dollar, this example is notable for its clean surfaces with shades of greenish-gold, lavender-gray, lilac, and turquoise on lustrous surfaces. Grading PCGS MS-68 with a green CAC sticker, it sold for $49,937.50. The coin last sold at auction at a 1998 Bowers & Merena sale where it brought $17,250.

The consignor comments in the catalog that Walter Breen, a numismatic scholar perhaps best known for his epic Complete Encyclopedia of U.S. and Colonial Coins, wrote when describing this coin for a 1991 Superior auction that it is the finest known U.S. quarter dollar, regardless of date.