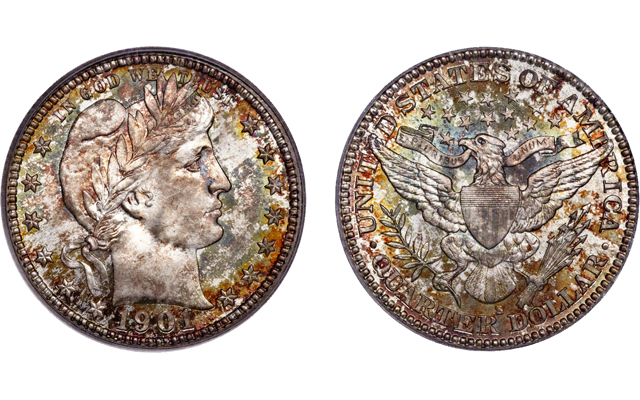 Below is the first.

The story: The 1901-S Barber quarter dollar is called the “King of all Barber quarters” and is a tough coin to locate in nearly all grades. Even the most worn examples graded Fair 2 approach $2,000. The Gardner example is one of two coins that Professional Coin Grading Service has graded Mint State 67, with another one certified at MS-67+, and a sole MS-68 piece that is the finest certified.

The Gardner Collection’s coin is notable both for its nearly flawless surfaces, described in the catalog as, “blanketed in vivid shades of apple-green, russet, violet, and gray toning that complements vibrant mint luster underneath.”

Gardner wrote that this coin exhibits, “A mesmerizing kaleidoscope of colors covers the surfaces of this coin. More than having just casual eye appeal, this coin commands the eye’s attention. I can lose myself in it for long stretches of time. So beautiful it is almost impossible to look away. Great rarity, great strike, great luster, and magnificent colors. This coin has it all.”

Graded MS-67 by PCGS with a green Certified Acceptance Corp. sticker signifying quality within the grade, it brought $258,500.