The Joys of Collecting: A lot of looking for precise buying 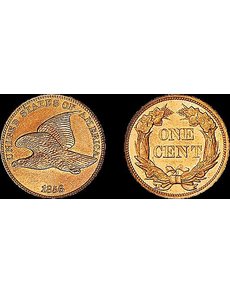 Is it true 1,952 examples of the popular 1856 Flying Eagle cent exist today? Would anyone pay attention to the claim that about 2,000 exist?

It is well known in statistics and news that if a writer wants to be authoritative and puts a number on something, it becomes official.

Otherwise it is just conversation, or so it seems.

If I were to write in a catalog that 1,952 examples of the 1856 Flying Eagle cent exist, the listing would be widely quoted. This seems to reflect deep research I have conducted over a long period of years. If I were to say that about 2,000 were estimated to exist, no one would pay attention! The late Walter Breen was a master at citing unsubstantiated numbers, and along the way much of what he wrote was viewed as unimpeachably authoritative.

Similarly, if I were to say that an 1856 Flying Eagle cent is a “Gem Proof” this would not attract buyers, never mind that as a professional I have been grading coins for decades. If I were to say it is a certified Proof 65, that becomes a fact. Buyers will get out their checkbooks!

Grading numbers are often very wiggly, but are viewed as unimpeachably authoritative by, perhaps, 91.2 percent of Coin World readers (being a bit silly now). This is a wonderful advantage for cherrypickers who, with knowledge, can game the system.

The other day, Stack’s Bowers Galleries received a great collection of more than 160 Mint State gold $20 double eagles on consignment for the World’s Fair of Money auction in August. I viewed them one by one under magnification, and all but four or five were “high end” within their slabs. Some of them will no doubt reholder a grade or two higher — bringing the consignor countless thousands of extra dollars. I fully expect some MS-62 coins will become MS-64 pieces. The catch: The consignor learned about grading, looked at many coins, but bought just a few and spent years doing it.

To game the system yourself, do a lot of looking and proportionately little buying. The older the holder the better. Although some coins were overgraded years ago, many will upgrade.

Avoid Certified Acceptance Corp. stickers, as these usually reflect coins that have been recently vetted by a fourth party and already found to be high end. However, if you are in a hurry and don’t want to become a cherrypicker and game the system, CAC stickers are a great way to quickly build a quality collection.

Another easy path to make money with some knowledge is to investigate numismatic specialties that are usually not certified — such as Hard Times tokens, Civil War tokens, medals of all kinds, and obsolete bank notes. Common varieties certified in high grades sell readily to buyers who are interested in such arcane fields but do not have the confidence to buy “raw” pieces.