FUN show surpasses expectations for most 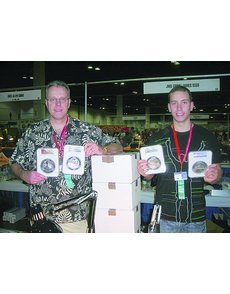 James Sego of JMS Coins, Naperville, Ill., and his son Michael hold up newly certified America the Beautiful 5-ounce silver bullion coins. The boxes between the two are filled with the slabbed coins. 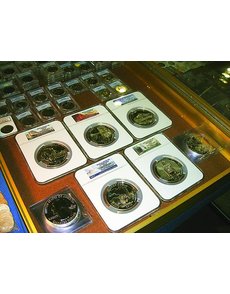 Slabbed and raw America the Beautiful 5-ounce silver bullion coins rest in Sego’s case, along with other U.S. coins in the standard, much smaller slabs.

Despite a change in location from its traditional Orlando home, the 2011 Florida United Numismatists convention, held in downtown Tampa Jan. 6 to 9, seemed to surpass most people’s expectations.

Longtime collectors and dealers alike look to the annual FUN convention — the first show of the year with a U.S. market focus — to serve as the barometer for the year in many ways, with a huge Heritage Auction Galleries multi-session auction including Platinum Night, a pre-convention auction by Bowers and Merena, and a large bourse floor full of dealers hungry to reposition their inventories for the new year.

Cindy Wibker, FUN secretary and convention coordinator, counted 3,000 registered attendees on Thursday, 2,400 on Friday, 3,200 on Saturday and 1,000 on Sunday for a total of 9,600 visitors. This count does not include people who came on multiple days — for example, a collector could register on Friday and also attend Saturday and Sunday, yet be counted only once.

While attendance was less than the 11,200 individuals who attended the FUN convention in Orlando in 2009, attendance rose from the 9,000 that were counted last year in Orlando and a “buzz” on the bourse floor that was palpable, with collectors sometimes standing multiple people deep to view the coins and other items displayed in dealer cases.

A constant question at the show from both dealers and collectors alike was how long the strong prices for 2010 America the Beautiful 5-ounce bullion coins would last. Online auction transactions during the week generally placed uncertified five-coin sets at the $2,300 to $2,600 level.

The sale of multiple five-coin Numismatic Guaranty Corp. graded Mint State 69 sets on eBay before and during the FUN convention at $4,500 to $6,000 helped create a strong demand for certified coins at the show.

General consensus at the show was that there would be very few — if any — America the Beautiful 5-ounce coins graded MS-70.

NGC’s vice president, Scott Schechter, commented, “The major condition issues are abrasions on Washington, heavy scuff marks, hairlines and long marks that encircle the interior of the rim. Spotting, unlike other silver bullion issues [such as American Eagle silver bullion coins], hasn’t been a significant problem.” He was unable to provide a total number of 5-ounce coins that NGC received at the show.

Sego expressed what many dealers were saying, that these coins are extremely hard to fairly price in the secondary market. While at first he had the certified five-coin sets priced at $4,500 in his case on the FUN show, on Jan. 8 he listed two sets on eBay as “Buy it Now.” Both sold for more than $5,000 each within 15 minutes, causing Sego to reconsider his pricing.

At the show, Sego submitted 90 coins to NGC for show certification and roughly 50 percent came back MS-69. “The distribution of grades was not even across the board, however, as fewer Yosemite and Hot Springs coins came back MS-69.” Sego added that his experience in these two issues was confirmed by other dealers.

ANACS was offering $49 five-day service for the new large coins. Paul A. Defelice, ANACS vice president of client relations and marketing, said that fitting the new holder for the coins was a struggle because the grading companies “had no specifications. We had to estimate.”

On the bourse floor

From an observational standpoint, while members of the public were not walking around with big bags of coins ready to sell, several dealers reported buying “fresh deals” at the show from a public that seemed curious to learn more about coins.

Heritage Auction Galleries held its traditional spot right in front of the main door, and reported buying multiple deals from the public, as did neighboring dealers in the front area.

Jim Stoutjesdyk, vice president of Heritage Rare Coin Galleries, said that he was busy from start to finish, with both wholesale and retail transactions. “Having the show in Tampa brought out the public that doesn’t come to Orlando.” From a wholesale perspective, he said that he was a strong buyer for beautiful, fresh coins while joining many other dealers in saying that the market for certified coins that are average or unappealing is weak.

He added that the supply of generic gold seemed to outpace the demand at this given moment, and said that if any area offered value to collectors currently, it would be classic commemorative coins.

Several dealers echoed the slight weakness in generic gold, citing perhaps an increased supply from long-held stores of gold in large European banks in response to record gold prices as the reason.

Mike Capawan of Keshequa Coins in Nunda, N.Y., cited continued demand for reasonably priced, uncertified classic collector coins like Seated Liberty dimes, Standing Liberty quarter dollars and Lincoln and Indian Head cents. His display cases were notable for having half-kilogram and 1-kilogram copper bars with coin designs that he was selling as collectibles for $10 and $29 respectively.

Greg Allen of Greg Allen Coins in St. Paul, Minn., said that his buyers wanted coins that were either brilliant, such as Franklin half dollars in MS-64 and MS-65 with full bell lines, or coins with “monster” rainbow toning, adding that he was doing a nice business in certified Mint State Morgan dollars in the $150 to $500 price range to collectors.

The New York International Numismatic Convention, held at the Waldorf Astoria Hotel Jan. 1 to 10 with a public bourse Jan. 7 to 9, directly conflicted with the FUN show and as such, only a handful of dealers specializing in world and ancient coins were present at the Tampa event.

Nicholas Economopoulos of Pegasi Numismatics in Ann Arbor, Mich., and Holicong, Pa., said that the show was OK for him with collectors interested in reasonably priced coins. Bill Kalmbach of Nilus Ancient Coins in Austin, Texas, echoed those sentiments of budget-friendly collector coins selling well.

The limited bourse for world and ancient coins seemed to benefit at least one Midwest collector, who purchased a five-figure ancient coin outside of his collecting area because he was intrigued with it in the dealer’s case. Such is a benefit of a limited selection of dealers — collectors are able to more fully examine a dealer’s stock.

The Heritage auctions, held Jan 5 to 9 across multiple sessions, were also lead by an extraordinary 1907 Indian Head eagle graded Proof 67. The coin was part of a group of five — the subject of a front cover story in the Dec. 27 issue of Coin World — that were consigned by Col. George Monroe and his wife, Jan, that were formerly in the personal holdings of Mint Director Frank Aleamon Leach Jr. and held by Leach and his descendants for a century.

Ten separate bidders competed for the coin, which opened at $550,000, with multiple bidders staying in past the $1 million level until it was down to just two bidders: a phone bidder with Heritage and Laura Sperber of Legend Numismatics. Sperber ultimately won the coin on behalf of her client for $2.185 million.

Other strong areas were Proof gold coins from the Henry Miller Collection, which were led by an 1887 Coronet $20 double eagle graded PR-67 + H cameo by NGC for $402,500. Also noteworthy was the Jim O’Neal Collection of Indian Head $5 half eagles, which was led by the finest collectible 1909-O Indian Head half eagle graded MS-66 by PCGS that realized a robust $690,000.

The multiple Heritage U.S. coin sessions realized more than $46 million when after-auction offers are included. This represents a substantial increase from the nearly $37 million that the 2010 Heritage FUN U.S. coin auctions generated. Read Coin World’s Market Analysis in the Feb. 7 issue of Coin World for more on the Heritage auctions. ¦