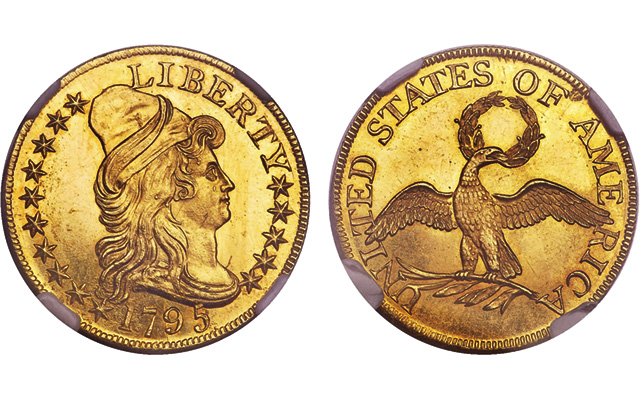 A 1795 Capped Bust $5 half eagle graded MS-66 with an NGC Star is the single-finest certified 18th century example of this denomination and is likely among the first gold pieces struck at the Philadelphia Mint. 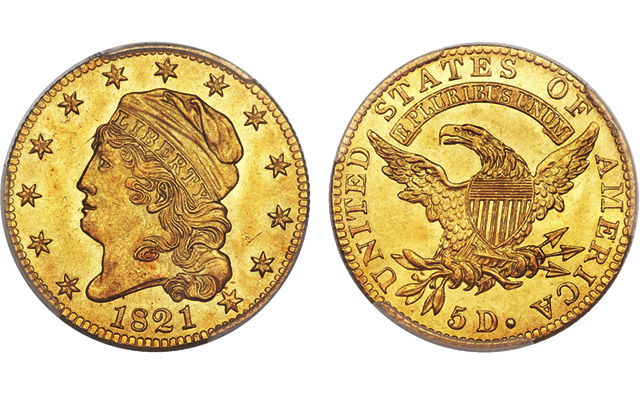 The 1795 Capped Bust $5 half eagle in the Platinum Night auction is the single-finest certified 18th century gold $5 piece; it is graded Numismatic Guaranty Corp. MS-66 ?. Heritage writes that it is “arguably the most historically important regular issue United States gold coin” in that the variety is widely recognized as the first variety of the first gold coin issued by the Philadelphia Mint. It was delivered in a batch of 744 examples on July 31, 1795, and production of 1795 $10 eagles would follow, with the first delivery taking place on Sept. 22, 1795.

An estimated 40 to 50 examples of the variety exist in all grades. Heritage explains that the piece comes from a middle die state that shows evidence of heavy die rust at the lower left obverse and several die cracks.

In describing the exceptional quality, Heritage notes fully prooflike fields on both sides, adding, “brilliant lemon-yellow mint color with a hint of pale orange that is visible when the coin is tilted under strong light. A razor-sharp strike boldly defines all the design elements, and the surfaces are pristine and nearly flawless.”

Promoting its appeal outside of the traditional audience of early gold collectors, Heritage concludes, “The unsurpassed desirability and historical importance of this magnificent example can also be easily understood and appreciated by virtually anyone outside of numismatic circles.”

While U.S. Mint records indicate that 34,651 Capped Head $5 half eagles were struck in 1821, the survival rate is miniscule with just 15 examples known in all grades, split between two different die varieties with two known Proof examples. Much of the U.S. gold coinage of this era found its way in the melting pot, victim of the shifting value of gold in the international market during this time period.

Research also indicates that the recorded 1821 mintage of the Capped Head half eagle may include many coins dated 1820, as the Mint often used dies from previous years.

Heritage suggests that the present coin, graded MS-63+ by Professional Coin Grading Service and of the BD-1 variety, may have been offered at B. Max Mehl’s June 1946 auction of the William Cutler Atwater Collection, as the coin in that collection was described as a “Beautiful uncirculated specimen” with “considerable brilliancy” and “a tiny short hair-line scratch on the right obverse” (as seen on the present example).

Heritage describes the present example as possessing “an irresistible combination of high technical grade, intense historic interest, and outstanding visual appeal,” noting that the finest known survivor (graded MS-66) has been off the market for the past three decades.

The piece offered at FUN was formerly in the collection of Amon Carter Sr. and Amon Carter Jr. and sold in 1984 at Stack’s auction of the Amon Carter Family Collection. It set a record for the issue when it appeared at an Ira and Larry Goldberg Auctioneers sale last year, where it sold for $540,500.