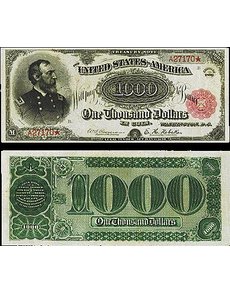 One highlight of the Heritage sale was this “Grand Watermelon” note, the only Series 1890 $1,000 Treasury note available to collectors. The note, graded Extremely Fine 40 by PCGS Currency, sold for $3,290,000.

When we said last month that, for paper money, 2014 would start off with a bang, we didn’t realize how explosive that start would actually be.

The multiple sessions of the Heritage Auctions paper money floor auction Jan. 8 to 10 at the Florida United Numismatists convention in Orlando consisted of more than 1,600 lots, 200 of them part of a special Jan. 10 “Platinum Night” event in which no opening bid was less than $3,000 and two lots sold for more than $1 million.

Prices such as these are not for the faint of heart, but the offerings were the kind of notes that can go years between appearances on the market. Some of them also showed that U.S. paper money is not a closed book.

One of the highlights of the auction was the only Series 1890 $1,000 Treasury note available to collectors, Friedberg 379b (Paper Money of the United States by Arthur L. and Ira S. Friedberg).

The note, graded Extremely Fine 40 by PCGS Currency, sold for $3,290,000 (all prices quoted include the buyer’s premium) after opening at $1.2 million.

The 1861 demand notes are the first issue of U.S. paper currency, and the back design is the origin of the term “greenback.”

It is unusual for any auction to have more than a few. This sale had a total of eight, of which two were especially beyond the ordinary.

Foremost among them was the unique 1861 $20 demand note, F-11a, the only note of this denomination with a handwritten “for the” rather than the engraved “for the” found on all other surviving notes (clerks hand-signed the notes on behalf of the two busy officials identified on the notes; the added “for the” indicates this authorized substitution of signature).

The note was graded Choice Fine 15 Net by Paper Money Guaranty due to a slight repair made to a corner. The note realized $411,250. ¦