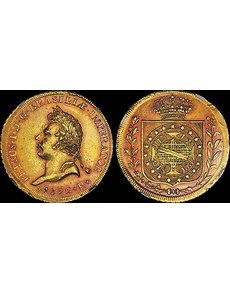 At Heritage’s Jan. 5 NYINC auction this About Uncirculated 55 1822-R Pedro I gold 6,400-real coin brought $499,375. Considered the first coin struck in independent Brazil, it doubled the record for a Brazilian coin at auction.

Around $130 million in rare coins sold during auctions immediately before and during the 2014 Florida United Numismatists show and New York International Numismatic Convention.

Heritage’s various FUN auctions brought more than $90 million and multiple records were set. Heritage noted that the nearly $2 million that a bidder paid for a 1927-D Saint-Gaudens gold $20 double eagle graded Mint State 66 is “the highest price ever paid for any U.S. coin struck and released to general circulation.”

In contrast, 1913 Liberty Head 5-cent pieces, of which five were struck and one sold at Heritage’s auction for $3.29 million, weren’t intended for circulation

One record was less qualified: the most valuable piece of paper money ever sold. An Extremely Fine 45 1890 $1,000 Treasury note — perhaps better known as a “Grand Watermelon note,” as the large zeroes on the back of the bill resemble watermelons — brought $3.29 million on Jan. 10. The big price represented a substantial return over time, as it was offered at a 1970 auction where it brought “just” $11,000.

At FUN a noteworthy individual collection was the Adam Mervis Large Cent Collection, which brought $8.55 million and saw a 100 percent sell-through rate.

An unusual element of this auction (though not surprising, given the dedication of aficionados of early American copper coinage) was that more than half of the lots, representing around 75 percent of the value in the auction, were purchased by floor bidders.

This vibrant floor participation is unusual in today’s auctions, where bidders often use the Internet to manage their bidding.

Of the more than 7,000 lots that were offered as part of Heritage’s various FUN U.S. coin auctions, floor bidders won just over 10 percent. However, these lots represented more than 35 percent of the value. Another striking statistic: More than 7,500 bidders competed for the FUN lots, and the $66.6 million U.S. coin portion of the sale (excluding the Mervis Collection) saw more than 97 percent of the offered lots sold. ¦