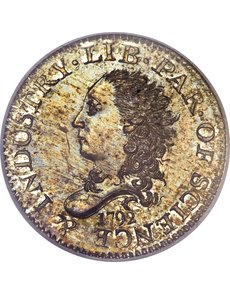 Easily the most prominent item to sell during the January festivities was the 1792 Half Disme SP67 PCGS, which realized $1,410,000. This coin, which attracted national media attention, is an example of the first circulating coin struck under authority of the Mint act of 1792. It is the only example designated a Specimen by one of the major grading services, and is exceeded in numerical grade by only one other coin. This coin was a part of the fabulous Greensboro Collection, Part II. Another 1792 Half Disme, this one graded Mint State 64 and from the Liberty Collection, sold for $528,750.

A proof silver dollar dated 1803, also from The Greensboro Collection Part II, sold for $851,875. This coin is termed a Novodel because it is believed to have been struck in the 1870s and was not a restrike of a legitimate Mint issue. With only four examples known, it is far rarer than the much more famous 1804 dollar, and its numerical grade of Proof-66 is unsurpassed.

Great pieces from the Greensboro collection dominated the results in the Currency auction as well. An example of Fr. 185l, one of just five Bruce-Roberts signed Series 1880 $500 Legal Tender notes to exist, sold for $411,250. This is the only example available to collectors, with three are in the collections of Federal Reserve Banks, and one residing permanently in the Smithsonian Institution.