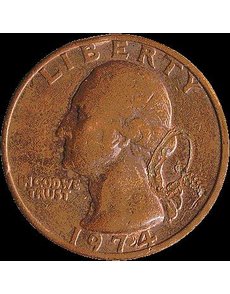 This 1974 Washington quarter dollar was plated with copper outside the Mint. 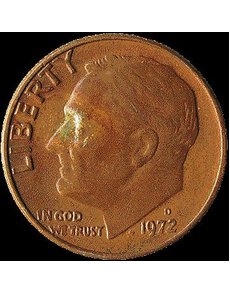 Despite being slightly underweight, this 1972-D Roosevelt dime has a heavy layer of copper plating. 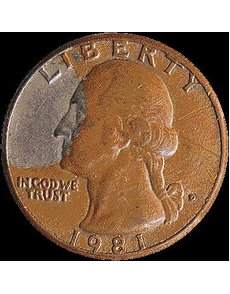 A contemporary counterfeit, this copper 1981-D Washington quarter dollar was incompletely plated with a layer of silver that, if complete, would have allowed it to slip into circulation. 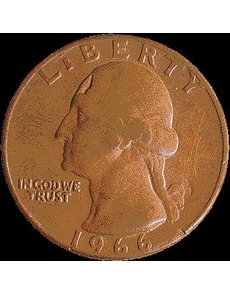 This well-crafted, largely copper 1966 Washington quarter dollar could fool many into thinking that it’s a genuine Mint error.

The March 18 Collectors’ Clearinghouse was dedicated to clad-composition coins struck on isolated copper cores. Such errors occur when both clad layers separate from the core after blanking but before the strike. These coins are severely underweight and usually show a weak strike.

It is theoretically possible to stumble upon a full thickness, full diameter, pure copper dime or quarter dollar. Such an error would trace back to the bonding mill, when the two copper-nickel clad strips and the copper core strip are fed between the rollers together for the first time.
If the core strip protrudes beyond the flanking clad strips at the leading or trailing end of the composite strip, it will be rolled to coin thickness during subsequent passes through the rolling mill. If the dangling pure copper segment is not trimmed away, it will enter the blanking press and any blank punched out of it will weigh the same as a normal blank (2.27 grams for a dime and 5.67 grams for a quarter dollar).
None seen so far
I have not yet encountered a genuine example of such a coin. I do not believe any have been authenticated. Yet many coins are bought and sold under the impression that they belong to this rare category of planchet error. The majority of fraudulent specimens are simply normal coins that have been plated with copper outside the Mint.
Shown here is a 1974 Washington quarter dollar that weighs 5.63 grams and that was plated with copper before being crudely engraved with the letter Q. The coin was subjected to X-Ray Fluorescence Analysis by John Lorenzo using an EDAX-Orbis Micro-XRF Elemental Analyzer. This machine records a pooled average of metallic elements present in the upper 10-50 microns (depth of penetration depends on the alloy).
Results were 93 percent copper, 5 percent nickel and 2 percent zinc (the last is a common contaminant in copper). For a normal quarter dollar, the values should be 75 percent copper and 25 percent nickel.
Nickel’s presence telling
More than a trace amount of nickel in a “pure copper” coin is a possible indicator that the coin is plated with copper. (The X-ray beam passes through the copper plating and picks up readings from the underlying copper-nickel). Conclusive proof of this was obtained some time earlier when I took a scalpel and shaved away a portion of the reverse design rim. The silvery glint of underlying copper-nickel was immediately exposed.
Lorenzo analyzed a series of copper-plated 5-, 10- and 25-cent coins (a total of eight pieces). Copper percentages ranged from 83 percent to 93 percent and nickel percentages ranged from 5 percent to 15 percent. I’m told the observed variation is due to variable thickness of the copper plating.
Our next coin, a 1972-D Roosevelt dime, managed to fool many experts (including me). It weighs 2.24 grams and initially didn’t seem to be plated. I scraped away at the reverse design rim and exposed only copper. Both surfaces are flecked with gray metal. XRF analysis produced readings of 87 percent copper, 11 percent nickel and 2 percent zinc. I toyed with the weird idea that this dime was composed of nickel or copper-nickel bits embedded in a copper matrix. However, before going to press I decided to dig more deeply into the rim with my scalpel. This final attempt revealed underlying copper-nickel.
A second population of full-thickness copper dimes and quarter dollars consists of coins struck on counterfeit copper planchets by a pair of counterfeit dies. These coins are sometimes mass-produced, plated with silver and placed into circulation. Other, higher-quality pieces are sold directly to unsuspecting collectors as off-metal errors.
Microscopic inspection of the accompanying 1981-D Washington quarter dollar shows crude workmanship. This piece was undoubtedly fabricated as a circulating counterfeit. It weighs in at a slightly elevated 5.76 grams and was only partly plated with silver. The area not covered by silver registers XRF values of 96 percent copper, 2 percent nickel, and 2 percent zinc. The plated area produces values of 72.4 percent copper and 23.2 percent silver.
A far more convincing copper counterfeit is represented by a 1966 quarter dollar that weighs 5.76 grams. The strike is sharp and the reeding properly spaced. The copper percentage at the surface is 96.4 percent. Nickel (1.4 percent) and zinc (2 percent) comprise the remaining elements. The key warning sign is a loosely adherent bit of excess copper found on the reverse face (not shown) that was originally decorated by a poorly defined olive leaf. This is not a lamination error and it clearly stood above the field before I removed most of it. (Invasive tests like this should only be performed if you’re pretty sure your off-metal coin is fake or if it has already been damaged.)