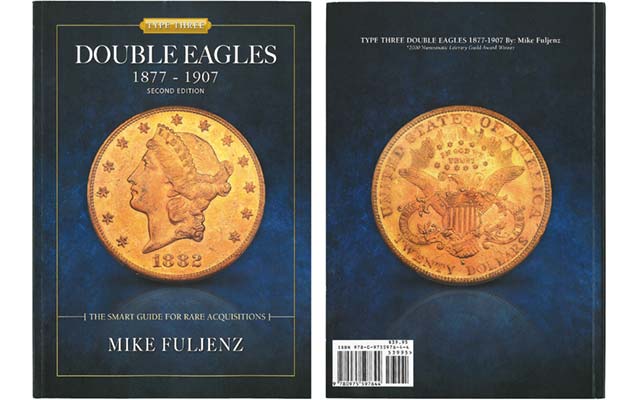 Second edition of book by Mike Fuljenz on Type II gold $20 double eagles is now available from the author.

The following text is from a news release prepared by Donn Pearlman for numismatist-author Mike Fuljenz:

An important new reference book about a popular United States gold coins series, Type Three Double Eagles 1877 - 1907 (Second Edition), provides beginning and advanced collectors a date-by-date analysis of every coin in the series, historical vignettes and more than 100 full-color photographs. The book was written by Michael Fuljenz, President of Universal Coin & Bullion Ltd. in Beaumont, Texas, who has won more than 50 awards from the Numismatic Literary Guild (NLG) for his consumer protection and education newsletters and earlier books and articles.

Fuljenz predicts that last year's wide-spread publicity about the discovery of the Saddle Ridge Hoard "should increase collector and investor interest in this (Type Three Liberty Head Double Eagles) series for a long time." The vast majority of the 1,427 gold coins unearthed in the Northern California buried treasure hoard were Type Three Double Eagles.

One revealing chapter of the book is described by the author as "the definitive article on the national motto, In God We Trust." It provides proof the inspiration for the motto actually goes back to the War of 1812, pre-dating the 1860s U.S. Civil War era that many believe was the backdrop for the motto.

Fuljenz provides useful collecting, investing, buying and selling tips as well as historical information and price history about this coin series. He includes information about counterfeits and consumer protection, such as the 2014 Collectible Coin Protection Act. Fuljenz assisted the Industry Council For Tangible Assets (ICTA) with lobbying in Washington, D.C., to get that law approved.

One of the 17 interesting chapters is devoted to "Peter," an eagle that lived at the Philadelphia Mint in the mid 1800s and inspired coin designs as well as bedtime stories.

Other noteworthy features of the book include how President Theodore Roosevelt worked with acclaimed sculptor Augustus Saint-Gaudens on the early 20th century "pet crime" of replacing the design of the Liberty Head Double Eagle and other U.S. coins; Type Three Double Eagles in the National Numismatic Collection at the Smithsonian Institution; celebrity coin collectors; and law enforcement tips on how to protect your coins and other valuables from theft.

Known as America's Gold Expert, Fuljenz has won dozens of prestigious national and regional awards and honors from the NLG, the Press Club of Southeast Texas and other organizations for his consumer education and protection work in rare coins and precious metals.

A respected community leader in his hometown of Beaumont, Texas, Mike also has served with distinction as a consultant to the Federal Trade Commission, United States Mint and Royal Canadian Mint, is on the ICTA Board of Directors and is a member of the Professional Numismatists Guild.

Subterfuge Publishing, the book's publisher, suggests a price for Type Three Double Eagles 1877 - 1907 at $39.95, including shipping. Copies can be ordered online at www.UniversalCoin.com.