From cents to dollars 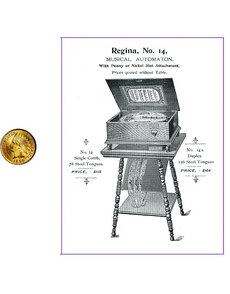 Artifacts from the year 1898 include an 1898 Indian Head cent and a coin-grabbing music box.

The U.S. Mint made vast profits coining cents in 1898, or “pennies” as they were termed in a long-ago news account.

The other day Glenn Grabinsky sent me a clipping from the Trenton Evening Times in New Jersey from Feb. 3, 1898, “Our American Pennies,” subtitled “Many Millions of Them Have Been Made — Are Often Counterfeited — Where They are Used — Made at a Profit.”

Before writing this article, I checked on Google to see if there was any mention of it, only to find it had been copied left and right, including by several magazines and even The Numismatist a few months later. Perhaps the Evening Times copied it, too, from an earlier source.

The article read: “The craze for 49-cent and 99-cent bargains requires a great many pennies in the way of change, and, as I have said, it is no unusual thing for the big department stores to take $10,000 worth at a time. Most of these come back to us by the way of the slot machines, which have come to be wonderful in number and variety.

“There are kinetoscope views, phonographs, automatic music boxes, candy and chewing-gum sellers, weighing machines, lifting machines and a hundred and one others standing at every hand and coaxing the pennies from their owners’ pockets. The result of all this has been that the government had hard work some of the time in maintaining the supply and can’t hardly make pennies fast enough to keep up with the growth in the demand for them.”

Today, sadly, coin-operated music boxes and kinetoscopes are long gone from the American scene, but 99-cent bargains are as plentiful as ever.

Today, Mint officials can read this from the 1898 article and weep:

“The government buys the blank coppers on which the design is stamped from a western firm, each 1,000 cents costing $1.25. So 100 cents with a face value of one dollar cost the government less than one-fifth of the sum. As a result of all this, Uncle Sam makes a profit on his pennies that would drive a pawnbroker to suicide with envy.”

Today, it costs more than a cent to make a Lincoln cent and more than five cents to make a Jefferson 5-cent coin.

The profit game still goes on — and in spades — with hundreds of millions of Native American, Presidential and related metal dollars. Actually, over 1,200,000,000 of them in storage, plus those in circulation. It costs Uncle Sam less than 32 cents for the metal and minting of each of these dollars. The profit puts to shame that made on “pennies” back in 1898!