Found In Rolls: Finding coins in the oddest places 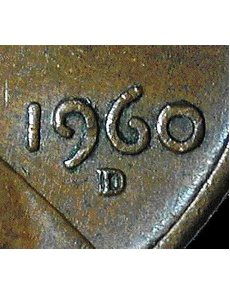 The repunched Mint mark error on this 1960-D Lincoln cent reveals a clear separation between portions of the two D Mint marks.

I have been an avid reader of Coin World for more than a half century and I remain greatly inspired by the many columns written by my fellow contributors to this great publication.

Gerald Tebben’s “Coin Lore” column published in the July 15 issue of Coin World points out a relationship between cars and coins to which I would like to make a few tiny additions.

While that may be true for a coin as large as a silver dollar, he must never have seen me open a roll of cents in such a way that the coins go flying through the air and rolling across the floor.

Not only do the coins approach the speed of sound as they scatter in every direction, they also manage to find their ways under and behind the largest and heaviest pieces of furniture in my home.

And they multiply too. Fifty cents in cents can seem like a thousand coins when you try to find where they ultimately landed after the kinetic energy of each coin has dissipated.

I actually ended up discovering this month’s find under the refrigerator, from a roll of cents that scattered as I opened it up.

First, back to the car-coin connection for a moment.

The acronym RPM is used in both the automotive and numismatic worlds.

In the automotive industry the term RPM or revolutions per minute is used when referring to a motor vehicle’s engine speed. RPMs indicate the number of revolutions or rotations the crankshaft in an engine experiences in one minute.

In numismatics, an RPM is a type of die variety known as a repunched Mint mark.

Prior to about 1990, Mint marks were punched into working dies by hand. A mallet and a Mint mark punch were used, and it usually took more than one tap of the mallet in conjunction with the punch to successfully add a Mint mark to a die.

Any movement of the punch between the taps of the mallet would cause the resulting Mint mark to show doubling, tripling or even more strikes.

The fantastic repunched Mint mark on the 1960-D Lincoln cent shown here reveals a clear separation between portions of the two D Mint marks. I describe this as a D/D West since the secondary Mint mark appears to the left or west of the primary D.

Always be sure to check the smaller details on each coin that you examine and you might be able to find some neat RPMs too.