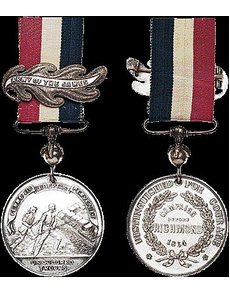 The Army of the James’ Distinguished for Courage Medal was presented to the “U.S. Colored Troops” who played an important part in the Campaign before Richmond during 1864.

Among the most historic and sought-after Union medals provided by a determined Union Army commander in lieu of an official medal was the Army of the James’ Distinguished for Courage Medal, presented to the “U.S. Colored Troops” who played an important part in the Campaign before Richmond during 1864.

This medal was the idea of Maj. Gen. Benjamin F. Butler, remembered in the South as “Beast Butler.” Butler, military commander of occupied New Orleans in 1862, responded to insults from local women against Union soldiers with an Army Order announcing that those perpetrating hostile acts would be treated as “women of the streets plying their trade.”

Butler’s “woman order” was long remembered and reportedly led to the manufacture of “Beast Butler Chamber pots” with his portrait baked into the porcelain.

The medal for the U.S. Colored Troops presents a very different image of Butler. It must be remembered that the very concept of arming blacks to fight in a “white man’s war” was violently controversial, even in the North.

Augustus Saint-Gaudens’ sculptured monument to Robert Gould Shaw on Boston Common recalls both the heroic fight of black troops in South Carolina and the death in combat of their Massachusetts-born white commander. Butler wrote after the war that he had been inspired by the heroism of his black volunteers to create this medal, modeled after Queen Victoria’s decoration for British troops fighting in the Crimea. Butler ordered the design by Anthony C. Paquet, personally paid for the striking at the Philadelphia Mint and handled the distribution.

Struck in 40.3 millimeter silver 3.5mm thick, the medals were pierced to receive a jump ring and ball grasped by an eagle’s claws connecting to an wide loop and red-white-blue ribbon. The obverse shows two African-American infantryman advancing with bayonets fixed on a Confederate fortification under the Latin inscription ferro iis libertas peveniet: “Freedom shall Come by their own Steel.” The inscription in the exergue specifies u.s. colored troops. The reverse legend distinguished for courage around an oak wreath enclosing campaign before richmond 1864. The medals hung from a red-white-blue ribbon topped by a leaf-shaped pinback header inscribed army of the james.

The exact number of medals presented is not known with accuracy. Rarer still are the bronze strikes that turn up occasionally. A number of years ago, apparently during the Civil War Centennial, struck copies were made with larger diameter and lower relief as a kind of medallic footnote to the genuine medals.