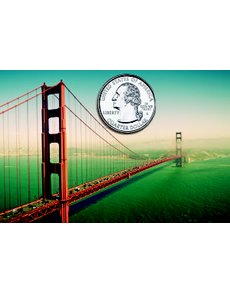 Whitman Publishing is celebrating its 80th year in numismatics by giving away free “S”-Mint quarters—unusual coins not seen since the 1950s.

Almost all S-Mint coins these days are Proofs, but these special low-mintage collectibles are copper-nickel circulation strikes, in beautiful Mint State.

“The last time the San Francisco Mint made circulation-strike quarters was in 1953,” said Kenneth Bressett, senior editor of the Red Book. “That is, the last time before 2012—when this exciting new coinage program was born.”

Since 2012, a limited mintage of each National Park quarter is being struck in San Francisco. Each coin bears a distinct “S” mintmark—the Treasury’s official guarantee that it was minted in California’s famous San Francisco Mint.

In terms of rarity, Bressett points out that the Denver Mint made 166.6 million Denali National Park quarters in 2012, but the San Francisco Mint made only 1.4 million.

Normally these low-mintage S-Mint quarters are available only direct from the U.S. Mint, in rolls or bags. But while quantities last, Whitman Publishing is including a free Brilliant Uncirculated S-Mint quarter with selected folders, maps, and albums.

“Whitman Publishing has been a leader in numismatics since 1934,” said company president Mary Counts. “These special S-Mint coins are our 80th-birthday gifts to the hobby community, to promote the National Park quarters and get Americans excited about collecting coins again.”