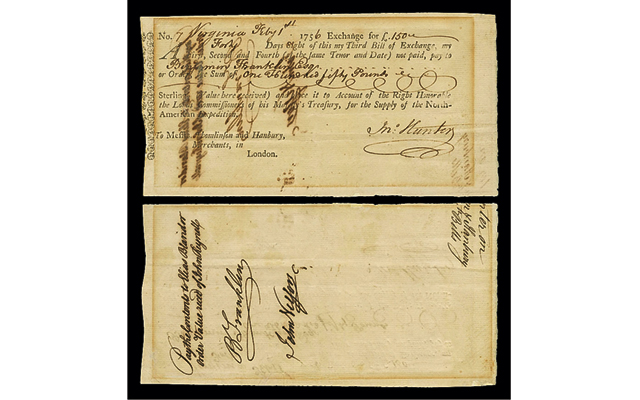 This Extremely Fine bill of exchange made payable to Benjamin Franklin and endorsed with his signature, sold for the equivalent of $16,741 at auction by Spink at its June 7 Bonds and Share Certificates of the World sale in Switzerland.

A bill of exchange made payable to Benjamin Franklin and endorsed with his signature sold for the equivalent of $16,741 at auction by Spink at its June 7 Bonds and Shares Certificates of the World sale in Switzerland.

The bill was graded by the auction firm as Extremely Fine.

The bill of exchange for £150 was issued to purchase supplies for the North-American Expedition and dated Feb. 1, 1756.

The bill was drawn by John Hunter on Thomlinson & Hanbury, London merchants. The back of the bill is endorsed by Franklin’s signature and that of John Nelson.

Beginning in 1745, Thomlinson & Hanbury had “held considerable British government contracts” to supply British troops in North America, according to the catalog.

Col. John Hunter, merchant and colonel of the Elizabeth City County militia and John Nelson, a Philadelphia merchant, were both money agents for the British forces in western Pennsylvania for Thomlinson & Hanbury, according to the catalog description.

The bill itself dates back to the French and Indian War of 1754 to 1763 when Franklin was actively involved in the defense of Pennsylvania.

“It [bill] represents the financial support of the militia by the British government” when Franklin “marched with his troops toward Gnadenhutten, Ohio, a settlement that had been overrun by the French together with Shawnee and Delaware Indians.”

For more information about this item or other lots in the auction, visit the Spink website.