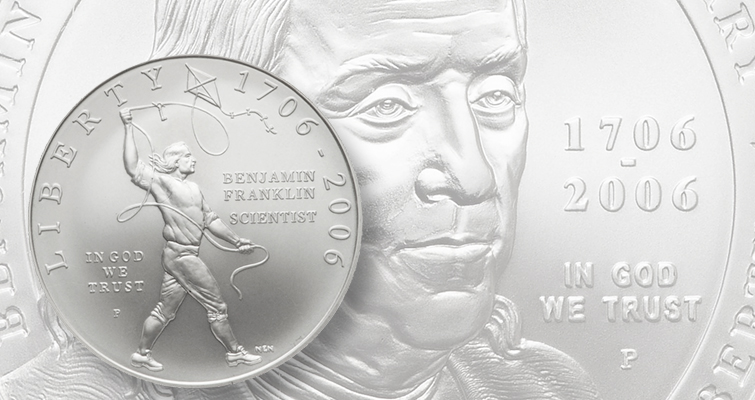 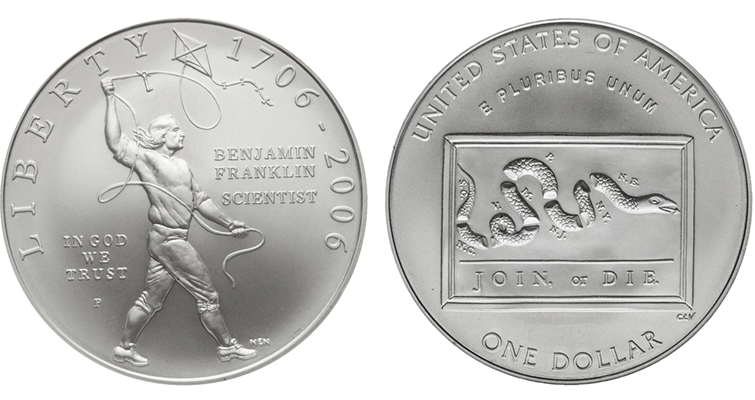 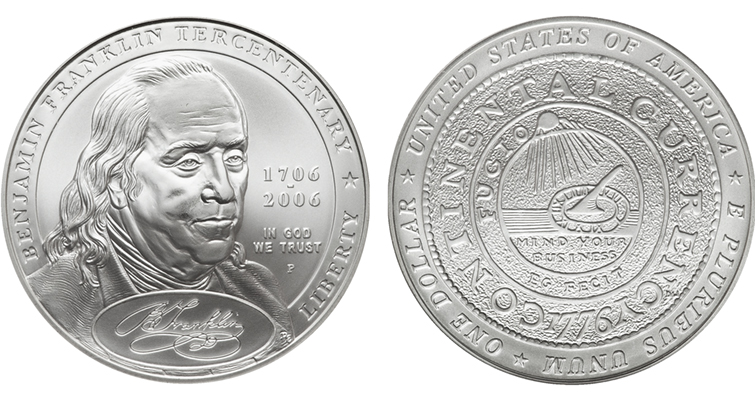 An unusual feature of the Benjamin Franklin commemorative dollars is that they were issued as a pair. Legislation that authorized commemorative coinage to mark the tercentenary of his birth in 2006 specifically required two coins. Franklin lived a long life spanning much of the 18th century during which he made diverse contributions to American life.

One coin, therefore, was intended to depict him as a younger man and as a patriot. The second was to portray his later years and his contributions to developing coins and paper money.

The legislation was drafted and introduced by the U.S. Rep. Mike Castle. This legislation had special and personal significance for him, as Castle is a direct descendant of Franklin.

Perhaps the greatest challenge came on the first coin in depicting Franklin as a young man; this isn’t the image that readily comes to mind for most Americans.

Then U.S. Mint Sculptor-Engraver Norman E. Nemeth drew a stout, athletic Franklin performing his kite experiment in which he proved the electrical nature of lightning. Because of the obverse legend and image, this coin is called the Benjamin Franklin, Scientist dollar.

For the reverse, then U.S. Mint Sculptor-Engraver Charles L. Vickers, depicted Franklin’s famous cartoon of a severed snake representing the colonies above the caption “Join, or Die.” Although the image was meant to depict his younger years, Franklin theorized his kite experiment when he was 46 and released the cartoon when he was 48.

A maximum of 250,000 of each coin was authorized in Proof and Uncirculated formats.

During a buoyant market in 2006, all offered products sold out. Officially their final sales totals are listed at 142,000 Proof coins and 58,000 Uncirculated coins for both the Scientist and Founding Father dollars. Today, both coins are among the more available and affordable dollars in the series.