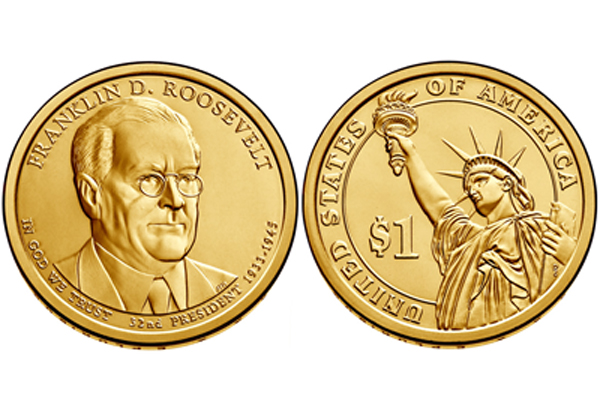 The U.S. Mint’s latest presidential coin cover will hit the market next week.

Franklin D. Roosevelt $1 coin covers can be purchased beginning at noon Eastern Time on Sept. 10, according to a release from the U.S. Mint, either through the Mint’s online catalog or by calling 800-872-6468.

The Roosevelt coin covers, the 32nd release in the presidential series, are priced at $19.95. They contain two circulating quality Roosevelt Presidential dollars from the first days of mintage at the Mint’s Philadelphia and Denver facilities. (Those days are March 5, 2014, and April 14, 2014, respectively.)

The coins are mounted on a display card, which is placed inside an envelope bearing A Flag for All Seasons stamp. The cover also features a portrait of President Roosevelt and the postmark of Sept. 10, 2014, Hyde Park, NY, which marks the day the product was issued. A maximum of 25,000 units will be produced.

Hearing- and speech-impaired customers with TTY equipment may order at 1-888-321-6468.  A fee of $4.95 will be added to all domestic orders for shipping and handling.

A 10 percent discount will be given for subscription orders, reducing the subscription-only price to $17.95.  The cut-off date to order the 2014 coin cover at subscription prices is Sept. 8, 2014.