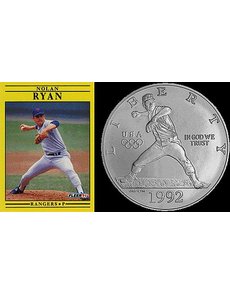 The similarity of the pitcher depicted on the 1992 Olympics dollar to this Nolan Ryan baseball card by Fleer is just one trouble that baseball-themed commemorative coins have brought the Mint.

The first baseball-themed commemorative was the 1992 Olympic silver dollar. At the 1992 Barcelona Games, baseball was included as a competitive sport for the first time. In an open design competition, artist John Deecken’s arrangement of a baseball pitcher in mid-delivery was selected.

Although the coin sold reasonably well, nearly 700,000 Uncirculated and Proof examples combined, it was shrouded in controversy. The player depicted on the coin bears an uncanny resemblance to Nolan Ryan’s image on his 1991 Fleer baseball card. The artist and Mint both dismissed the similarities as coincidence, but the debacle caused considerable embarrassment for both parties.

In 1995, when the bloated 1996 Atlanta Centennial Games commemorative program began, baseball was one of the sports selected. Baseball is depicted on a 1995 Olympic half dollar. Collectors’ enthusiasm for a baseball Olympic coin must have diminished. Only 282,692 of the authorized 2 million sold, the lowest figure for a modern commemorative half dollar up to that time.

The 1997 Jackie Robinson commemorative coins, commemorating the man who 50 years prior broke the color barrier in baseball, are as noble and worthy as any issue. But they were also notoriously poor sales performers.

After holding an open design competition, the Mint must once again produce baseball commemoratives, despite this underwhelming track record. A number of factors, however, suggest these coins will be different from their predecessors.

This time, the Mint will produce copper-nickel clad half dollars, silver dollars and gold $5 coins all with a common design. This is the first U.S. commemorative coinage issue that will have the same design across multiple denominations. This strengthens the notion that these three coins are a set and should be collected together.

Second, the coin will be dish-shaped with a convex reverse to more closely resemble a baseball. The concave obverse will feature a glove (selected in open competition). The unique shape of the coin should certainly accentuate its design elements, and suitably compensate for the limitations imposed by the shallow relief of modern coinage. Its novelty should bolster sales, too.

And if a ball and glove seem obvious to the point of banality, at least they won’t be controversial.