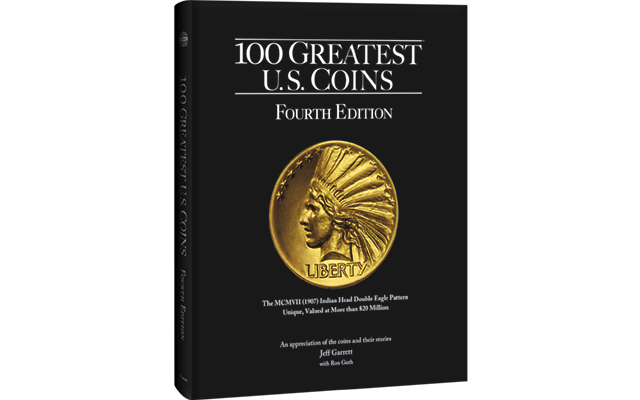 The fourth edition of 100 Greatest U.S. Coins has updated rankings based on polling members of the Professional Numismatists Guild.

The fourth edition of Jeff Garrett and Ron Guth's 100 Greatest U.S. Coins from Whitman Publishing will be available Oct. 25.

The 10-inch by 12-inch, 144-page, illustrated, hardcover reference book retails for $29.95. The book will be available from Whitman and from booksellers and hobby shops nationwide. Before Oct. 25, the book can be pre-ordered from those retailers.

After publication, the book will be available for loan, free, from the Dwight N. Manley Numismatic Library in Colorado Springs, Colo., as a benefit of membership in the American Numismatic Association.

The introduction of the fourth edition has been expanded with more full-color illustrations and text describing the history of United States coinage, ways to collect U.S. coins, grading standards, determining values, and other facets of the hobby.

The 100 greatest U.S. coins were voted on and ranked by members of the Professional Numismatists Guild. In the fourth edition, the celebrated 1804 Draped Bust silver dollar rose to the No. 1 spot (up from No. 5, and displacing the 1913 Liberty Head 5-cent coin at the top of the rankings).

The unique 1851 Seated Liberty dollar struck over a New Orleans dollar dropped entirely from the list, and the 1974 aluminum Lincoln cent made its debut, at No. 88.

The new edition also includes illustrated biographies of the “Great Collectors of the Past,” from Harry Bass to William Woodin; a price history of the 100 greatest coins from 1960 to date; a chart of the top 200 U.S. coin prices realized at auction from 1990 to 2014; a breakdown of the 100 greatest coins by denomination and coin type; a glossary; a bibliography for further research; and a detailed index.

In the foreword, Mark Salzberg, chairman of Numismatic Guaranty Corporation, notes that even though the 100 greatest U.S. coins are valuable, they’re undervalued in the broader context of rare collectibles.

“The 250 highest prices paid for U.S. coins at auction total just less than $250 million in value,” Salzberg writes. “In context, that is a bit less than the sales price of the most valuable painting ever sold, Paul Cezanne’s The Card Players.”

Kenneth Bressett, longtime senior editor of the Guide Book of United States Coins, writes, “Not all of the 100 Greatest U.S. Coins are unique specimens confined to one collection. A lucky numismatist could potentially find a 1955 Doubled Die Obverse Lincoln cent in their pocket.”