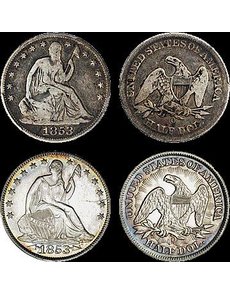 The recently discovered fourth known example of 1853-O Seated Liberty, Without Arrows and Rays half dollar (coin at top), certified Very Good 8 by PCGS, has been consigned to Stack’s Bowers Galleries’ August sale to be held in conjunction with the ANA World’s Fair of Money in Philadelphia. Mint records do not indicate any were struck, although records do show a mintage of 1,328,000 for the With Arrows and Rays subtype (coin at bottom).

An 1853-O Seated Liberty, Without Arrows and Rays half dollar, only the fourth known example, is headed to auction in August after a dealer briefly dismissed it as only of melt value.

The coin has been certified by Professional Coin Grading Service and graded Very Good 8. It is the first example of the design subtype to be reported since 1911.

While the discovery of a previously unknown example of an 1853-O Seated Liberty, Without Arrows and Rays half dollar is a remarkable story, the ending could have been tragic. The dealer who first saw the coin could have mistakenly purchased the coin for its silver content, about $15, but the husband of the coin’s owner was persistent in believing that the coin might be rare.

As a result, the coin will appear in Stack’s Bowers Galleries’ August auction to be held in conjunction with the American Numismatic Association World’s Fair of Money in Philadelphia. In comparison, a PCGS Very Fine 35 piece once in the famed Garrett Collection sold at Stack’s Oct. 17, 2006, auction for $368,000.

The newly discovered 1853-O No Arrows and Rays half dollar was the only 19th century silver coin contained in a group of silver coins, about $150 to $165 in face value, that had been in a suitcase for more than 30 years, stored in a woman’s Washington state home. Her father had accumulated the dimes, quarter dollars and half dollars from the 1940s, 1950s and 1960s during his travels as a truck driver.

Coin World spoke to the family, who requested anonymity for this story.

Upon the father’s death in 1979, the woman’s mother asked her and her husband to hold the accumulation of silver coins for safekeeping.

The woman’s mother died in February. The woman and her sister are co-executors of their mother’s estate.

The woman and her husband, a casual coin collector who has filled coin folders primarily with coins from pocket change, set about the task of liquidating the coins from the suitcase. He took the 1853-O half dollar to a local coin shop for an opinion on the coin’s value and was informed it was likely worth $15, its melt value. The woman’s husband had already looked up Seated Liberty half dollars in his 2002 edition of A Guide Book of United States Coins (the “Red Book”), and was aware of the existence of 1853-O Seated Liberty, No Arrows and Rays half dollars.

After the woman’s husband suggested the dealer re-examine the coin, calling attention to the absence of arrows and rays, the dealer said the coin needed to be examined by PCGS.

The woman’s husband did some online sleuthing to determine what firm had last handled one of the three previously known examples of the 1853-O No Arrows and Rays half dollar and came upon the Stack’s name, now Stack’s Bowers Galleries.

In late March, the woman’s husband contacted Stack’s Bowers, where he was put in touch with Gene Nesheim, numismatic sales associate at the firm. Nesheim convinced him that it would be prudent to have the piece professionally authenticated by PCGS.

Reluctant to ship the potential treasure, the woman and her husband arranged a May 21 flight to Southern California, where both the auction house and PCGS have offices, and hand-delivered the coin to Stack’s Bowers.

Arrangements were made to hand-deliver the coin the same day to PCGS at the grading service’s headquarters nearby. Nesheim brought the coin into PCGS’s secure premises. Although still reluctant to leave the coin behind if it was indeed as rare as the numismatists who had already inspected believed it was, the couple entrusted the coin to Nesheim and PCGS.

After 10 days of research at PCGS, Nesheim called the couple on May 31 with the good news that the coin had indeed been certified as genuine.

The coin was subsequently consigned for sale in Stack’s Bowers August auction. Napolitano said the coin will be offered Aug. 9 during the Rarities Night portion of the auction.

The woman and her husband said that they and other members of their family plan to attend the auction.

Not only did the coin recently escape a destructive fate, it also escaped looting earlier. The woman said that during their childhood, her three brothers had the habit of snitching change from their dad’s stash of coins and spending it on ice cream treats.

Two versions of the 1853-O Seated Liberty half dollar design subtype might never have been struck had it not been for the California Gold Rush and legislation aimed at combating the removal of silver coins from circulation for their melt value.

Gold flooding into the market from the California Gold Rush led to a drop in the price of gold relative to silver. Silver coins with a bullion content suddenly worth more than face value virtually disappeared from circulation by 1852. The coins could be melted for a profit.

Congress reacted with passage of the Act of Feb. 21, 1853; the act ordered a reduction in the weight of the half dime, dime, quarter dollar and half dollar, but not of the dollar and the 3-cent coin. The reduction in weight was successful in halting the melting.

No U.S. Mint mintage records have been found that explain the existence of the 1853-O Without Arrows and Rays half dollar, though several theories exist.

Author Walter Breen surmised that the Philadelphia Mint shipped six obverse dies without arrows to the New Orleans Mint, with only one of the dies used. “Absence of any record of manufacture suggests that the few survivors were made for presentation purposes, only to be spent later and kept as pocket pieces,” Breen writes.

In their 1993 book, The Complete Guide to Liberty Seated Half Dollars, Randy Wiley and Bill Bugert, while identifying the design subtype as “one of the greatest rarities in U.S. numismatics,” also suggested the heavily circulated pieces were not a regular issue. They speculated the then three known surviving examples may have been trapped in a coin bin and accidentally distributed into circulation with coins of the new weight standards “in salary to Mint employees.” They also speculated that the coins may have been “clandestinely struck for Mint employee collector friends.” However, “The latter is unlikely because all of them are heavily circulated.”

In 100 Greatest U.S. Coins, co-authors Jeff Garrett and Ron Guth rank the 1853-O Seated Liberty, No Arrows and Rays half dollar at the 58th spot on the list.

Garrett and Guth suggest that it is possible that the New Orleans Mint struck a quantity of 1853-O half dollars of the old standards before the Mint Act became effective.

“Presumably they were all destroyed, or believed to have been destroyed, after the effect date of the Act, thus explaining why none are recorded in the Mint’s records,” according to Garrett and Guth.

The 1853-O Seated Liberty, Without Arrows and Rays half dollar became known to the collector community sometime before 1881, when Philadelphia numismatist J.W. Haseltine publicized its existence.

W. Elliot Woodward, when cataloging his 1885 auction of the J. Colvin Randall Collection, published the first expanded look at the coin when he sold Randall’s example, then graded Very Fine 20.

Collector Harold P. Newlin purchased the Randall coin, which eventually became part of the expansive numismatic holdings of T. Harrison Garrett, before passing on to his son, John Work Garrett. The Garrett Family Collection was bequeathed to Johns Hopkins University; the collection was sold through Bowers and Ruddy at auction in 1979 and 1980.

Stack’s sold the coin at auction in October 2002, Auctions by Bowers & Merena sold it in July 2004 and Stack’s sold it again in the 2006 sale, when it went into a private collection.

Of the two other examples, one is uncertified but graded VG-8 and the other is graded Good 6 by PCGS.

The VG-8 piece, once part of the famed H.O. Granberg Collection, was first made public when it was displayed at the 1911 ANA convention. The piece afterward passed through the hands of William H. Woodin, Waldo C. Newcomer, B. Max Mehl, Col. E.H.R. Green, Charles M. Williams and was eventually offered as part of the collection promoted as belonging to actor Adolph Menjou in 1950, where it was acquired by dealer Joseph Stack on behalf of Baltimore collector Louis E. Eliasberg Sr.

The Eliasberg example, the only one of the four known pieces not certified, is in a private collection.

The coin that is now graded Good 6 came to light during the April 1892 auction by S.H. & H. Chapman of the Colin E. King Collection. The King example passed through the hands of a Who’s Who among numismatic luminaries, including Col. E.H.R. Green, who at one time had owned the coin that Eliasberg would later own.

Following Green’s acquisition, the coin passed through the hands of nearly 20 numismatists before ending up in a California collection.