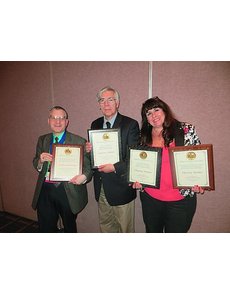 A trio of award winners having exhibits with multiple awards, from left to right, Simcha Laib Kuritzky, Lawrence Sekulich and Charmy Harker, pose with their awards earned during the recent American Numismatic Association show in Rosemont, Ill. In total, 53 competitive exhibit awards were presented by the ANA at the show.

Lawrence Sekulich was one of four adult exhibitors individually singled out by the ANA for creating an exhibit that won more than one award. He was presented with the Howland Wood Memorial Award for Best-of-Show Exhibit for “Hwenne Gold Was Smite in Coign.”

Sekulich also won the Gaston DiBello/Melvin and Leona Kohl Memorial Award in the Gold Coins exhibit class for that exhibit.

First runner-up honors for the Best-in-Show Award, the Radford Stearns Memorial Award for Excellence in Exhibiting, went to Charmy Harker for her exhibit, “Penny Potpourri: A Collection of Penny Creations.”

? The Thos. H. Law Award for the best display by a first-time exhibitor.

The second runner-up for the Best-in-Show Award was Simcha Laib Kuritzky for his exhibit, “Boy for Sale? Tokens for the Redemption of the Firstborn Son.”

He also won the Women in Numismatics Award for his exhibit “Henrietta Szold and Her Legacy: Hadassah and Youth Aliyah.”

The Szold exhibit also won the Ira and Larry Goldberg Award for the Best Exhibit of Coins that Made History, as well as the Menachem Chaim and Simcha Tova Mizel Memorial Award in the Numismatics of Africa and the Middle East exhibit class.

Kuritzky also won the Clifford Mishler Award in the Convention Theme exhibit class for “Meet Me at Osaka, Japan for the Expo ’70 Fair.”

The second-place award in the Medals, Orders, Decorations and Badges exhibit class went to Donald H. Dool for “The Victories of Jose de San Martin — San Lorenzo, Chacabuco, Maipu and the Crossing of the Andes.”

Dool was also presented with second place in the Gold Coins exhibit class for “The Panamanian Gold Proofs of 1975.”

The Henry Christensen/John Jay Pittman Sr. Memorial Award in the Numismatics of the Americas exhibit class went to Dool for “The Medals and Monuments of Jose de San Martin — from Lima to Buenos Aires with Stops Along the Way.”

He also won second place in the Numismatics of Europe exhibit class for “AD Dated Copper Coins of the Fifteenth Century.”

Second place went to Robert Rhue for “Chicago Man Stakes Claim to Outer Space: James Thomas Mangan and the Coins of The Nation of Celestial Space.”

No third-place award was presented.

Third place was presented to Judy Schwan for “An Introduction to Love Tokens.”

The Dottie Dow Memorial Award was presented to Oded Paz for “Dottie Dow — The Queen of Elongated Coins.

No second- and third-place awards were presented.

The William C. Henderson/Fred Cihon Memorial Award was presented to Jeffrey Bercovitz for “Indiana’s State Seal: Variations on a Theme.” Second place, went to William A. Burd for “Medals Issued in Gold by the Chicago Coin Club.”

Numismatics of the Americas

Numismatics of Asia and

The Aaron Feldman Memorial Award went to Jerry Fochtman for “Dr. Daniel W. Valentine: Profile of a Numismatic Pioneer” and the second-place award was presented to Mark Wieclaw for “Roman Coins and Their Values: The Evolution of the Most Used Reference on Ancient Roman Coins.”

The Robert Hendershott Memorial Award was presented to James Reinders, “Numismatic Clock — A Challenge to Collect”; second place went to Pete Smith for “I Collect Weird Stuff”; and third place was awarded to Thomas J. Uram for “Morse Code on Money.

No first- or second-place awards were presented.

Katie Reinders won The Charles H. Wolfe Sr. Memorial Award for the Young Numismatist Best-of-Show Exhibit for “A Century of Oregon: Frontier of the Future.”

YN Erich Lueke was presented with the James L. Betton Memorial Award in the World Coins class for his exhibit, “Composition and Design Changes in North American World War II Circulating Coinage. No second- or third-place awards were presented in this class.

No YN exhibitors entered in the following exhibit classes: Paper Money; Israeli or Judaic; Medieval and Ancient; and Errors and Varieties.