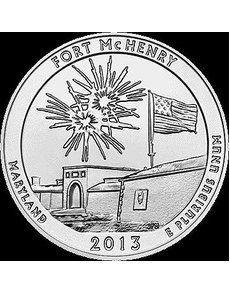 Image courtesy of United States Mint.The design for the reverse of the 2013 Fort McHenry National Monument and Historic Shrine quarter dollar replicates a Defenders’ Day celebration at the restored garrison. 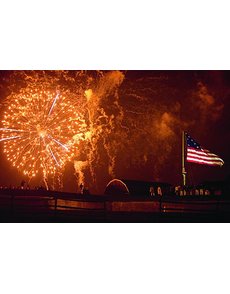 Image courtesy of National Park Service.Photograph taken at Fort McHenry during a previous year’s Defenders’ Day celebration captures fireworks exploding overhead, reminiscent of the munitions barrage the fort endured during the War of 1812 siege, inspiring Francis Scott Key to write the lyrics for what would become “The Star Spangled Banner.” 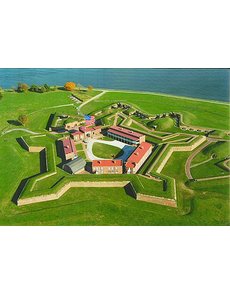 Image courtesy of Maryland Governor’s Office.Aerial photo depicts the coastal star-shaped Fort McHenry, best known for its role in the War of 1812 during which its soldiers successfully defended Baltimore Harbor from an attack by the Royal Navy.

The official launch ceremony for the 2013 Fort McHenry National Monument and Historic Shrine quarter dollar is scheduled for 10 a.m. Sept. 13 at the restored military installation at 2400 E. Fort Ave. in Baltimore.

The U.S. Mint-sponsored ceremony will be followed by a coin exchange in which the public can exchange cash for $10 rolls of the new Uncirculated quarter dollars struck for circulation.

The 2013 Fort McHenry National Monument and Historic Shrine quarter dollar — the 19th of 56 to be issued under the America the Beautiful Quarters Program — is set to be released into circulation on Aug. 26.

The coin’s reverse design, created and sculptured by U.S. Mint Medallic Sculptor Joseph F. Menna, reflects the site during the Defenders’ Day celebration, considered the centerpiece annual event held at Fort McHenry. The fireworks symbolize the “rockets’ red glare,” linking the fort to its historic past.

Sept. 12, Defenders’ Day, is a legal holiday in the state of Maryland. It marks the successful defense of the city of Baltimore beginning on Sept. 12, 1814, from an invading British force during the War of 1812.

Fort McHenry is best known for its prominent role in the successful defense of Baltimore Harbor from an attack by Britain’s Royal Navy in Chesapeake Bay Sept. 13 and 14, 1814.

During the
two-day bombardment, Francis Scott Key was inspired to write “The Star-Spangled Banner,” which would eventually become the lyrics set to the tune of Ralph Tomlinson’s “To Anacreon in Heaven” and become the U.S. national anthem.

According to the National Park Service: “Fort McHenry was constructed between 1799 and 1802. It was in the shape of a five-pointed star, which was a popular design during the period. Each point of the star was visible from the point on either side and every area of land surrounding the fort could be covered with as few as five men.”

Major improvements to the historic garrison were made during the 1830s.