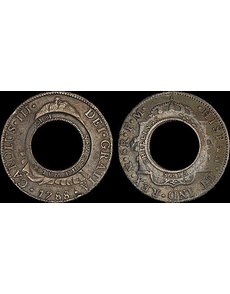 This 1813 Holey dollar from Australia is one of the coins Wyatt E. Yeager admitted to stealing from the ANA Museum. It was sold in a July 2007 auction in Australia for the equivalent of $191,082. 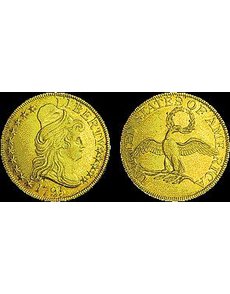 This 1795 Capped Bust gold $5 half eagle is among the coins that Wyatt E. Yeager has admitted to stealing from the ANA Museum while he was employed there as collections manager for three months in 2007.

A former museum collections manager of the American Numismatic Association has been sentenced to 27 months in federal prison and two years supervised release and was ordered to pay $948,505 to the ANA in restitution related to his 2007 theft of more than 300 coins from the ANA’s Edward C. Rochette Money Museum.

Wyatt E. Yeager was sentenced by Judge Leonard P. Stark in the U.S. District Court in Wilmington, Del., on April 24.

Yeager surrendered to U.S. law enforcement on Jan. 11, and the next day he entered a guilty plea related to the theft of 338 coins valued at nearly $1 million in coins from the ANA’s museum in Colorado Springs, Colo. Yeager worked at the ANA from Jan. 3, 2007, to March 21, 2007, and he sold the stolen coins through auctions in the United States, Australia and Germany in the months following the thefts.

Yeager submitted a plea agreement on Jan. 12 where he pleaded guilty to one felony count of theft of major artwork in violation of Title 18, Section 669, of the United States Code, which applies to a person who “steals or obtains by fraud from the care, custody, or control of a museum any object of cultural heritage. ...” The elements of the theft are that Yeager knowingly and willfully stole or obtained by fraud from the care of a museum an object of cultural heritage. The crime carries maximum penalties of not more than 10 years imprisonment, a $250,000 fine, three years supervised release, forfeiture, restitution and a $100 special assessment.

Prior to the sentencing, Yeager submitted a sentencing memorandum advocating for a reduced sentence while the government filed a response with reasons supporting a sentence that would reflect the seriousness of the offense.

Federal sentencing guidelines suggested a range of 70 to 87 months imprisonment, but Yeager’s defense contended that the suggested sentence would be unduly harsh. In his sentencing memorandum that argued for a downward variance — or a reduced sentence — Yeager stated: “My love of coins and metal conservation led me to employment at the American Numismatic [Association] Museum. I absolutely loved my job. Everyday was a fascinating discovery of history and beauty through metal.” The sentencing memorandum adds, “Tragically, in two short months Wyatt threw away everything he had worked for years to achieve, losing his job, destroying his career and professional aspirations and jeopardizing his liberty.”

In explaining why he stole from the ANA, he wrote: “When people ask me ‘What were you thinking,’ I can’t honestly answer them. To this day I can’t even explain it to my wife. … When I committed the crime I can only relate it to a feeling of sleepwalking in a different reality.”

He said his first impetus was to use the proceeds from the stolen coins to support his grandparents and help pay off their mortgage.

Yeager’s sentencing memorandum further stated that his “demonstrations of contrition and acceptance of responsibility go far beyond verbal expressions.” It cited that while living in Ireland after he left the ANA, Yeager learned that the government was pursuing criminal charges against him and he cooperated with law enforcement, agreeing to return to the United States without extradition and returned 38 coins to the government (of which the ANA determined that 32 belonged to its museum). Yeager further claimed “exceptional family dependence” since he has been a stay-at-home-dad for the past three years.

The memorandum further addresses “other collateral consequences” and states that, while “his reputation is irretrievably tarnished, and he has lost the respect of many friends and colleagues,” he has “the prospect of a new career in the manufacture and sale of mining equipment.”

Among writers of the letters filed in support of leniency for Yeager was his wife, Jennifer Yeager, who wrote that a reduced sentence “would mean that Wyatt could return to work on building a new career so that we can start to repay his debt and rebuild our lives.”

In the government’s response to Yeager’s sentencing memo, filed on April 16 and signed by David L. Hall, assistant U.S. attorney, it wrote that the sentencing guidelines-based recommendation was appropriate because the theft of cultural property is more serious than the theft of other forms of property.

The government response stated that in stealing the coins from the ANA, Yeager “also deprived the public of a cultural resource; the coins were no longer available for the public to enjoy and for experts to study. For the most part, this remains the case: the coins are scattered all over the world in the hands of private collectors.”

The government sought enhancements to the sentencing guidelines as Yeager stole objects of cultural heritage from the museum. To support this, the government wrote: “Yeager is an embezzler. Not all embezzlers are equal. The embezzlement of rare coins from a museum is not the same as the embezzlement of cash from a grocer’s till. Cultural property represents the history of mankind.”

Citing evidence of the historic importance of stolen coins including the Australian “Holey Dollar,” which sold at a 2007 Australian auction (that Yeager attended) for $155,775, the government concluded: “These coins deserved special care. Their theft deserves special punishment.”

The government also recognized the current logistical challenge now presented by the theft, arguing that by selling the coins at auction, Yeager intended to maximize the return on his crime and as a result, these coins are in private hands all over the world.

The government added that the recovery effort for the missing coins “is likely to go on for years, and is unlikely to result in one hundred percent success.”

While ANA general counsel Ronald Sirna said Jan. 19 that he was hopeful the ANA would receive the coins “within a few days,” as of April 24, no coins stolen by Yeager have been returned to the ANA. According to RyAnne Scott, the ANA’s library and communications director, the FBI has recovered 32 of the ANA’s coins, which will be turned over to the ANA at a later date (not yet set). The identities of the additional six coins that Yeager gave the FBI that were not the property of the ANA will be released when the coins are turned over to the ANA by the FBI; those six coins will count as part of his restitution, according to Scott.

The ANA is working with Robert Wittman Inc., a consulting firm that specializes in recovering stolen art and collectibles to investigate and recover the stolen coins. Wittman said that his firm is actively investigating the case but that “because of the sheer immensity of the numbers, we can’t go after every coin.” When Coin World asked about what, if any, steps have been taken to notify the buyers at auction of stolen coins consigned by Yeager, Wittman replied, “The ANA is not responsible for alerting people if they purchased a stolen coin; it is the responsibility of the possessor to figure out if the coin is stolen,” adding, “the ANA is the victim here.”

Since the stolen coins have been defined as cultural property and were stolen from a museum, they are the property of the ANA. According to the theft of major art statute, a person would be subject to criminal charges only if he or she knew that the object of cultural heritage was stolen from the museum.

When asked what he would recommend to collectors who are concerned that they may have purchased a stolen coin, Wittman reminded people to view the list of stolen coins on the ANA website at www.money.org/ana_custom/MissingCoinsList.aspx. He recommended that if people suspect that they have in their possession a coin stolen from the ANA museum, they should call him at 610-361-8929.

Yeager is not required to start paying his restitution until his prison term is over, according to Scott, and the ANA had not yet received the $200,000 that Yeager had paid toward restitution. Scott stated, “The money will likely go in the same museum fund as the insurance settlement.”

The ANA received $750,000 in a negotiated settlement from its insurance carrier in August 2009 for the losses incurred resulting from the theft of coins in early 2007.

According to Scott, the insurance payment was placed in a dedicated museum fund. Although some settlement funds may be used for recovery costs, no funds have been distributed at this point, she said.

Funds used to upgrade the security system came from the ANA general fund. While Scott noted that although details of ANA’s internal security procedures and system information are confidential, the ANA has reinstated an on-duty security guard at its Money Museum.

In an April 24 ANA press release, ANA President Tom Hallenbeck said: “The harm caused by this theft transcends monetary loss — it was a terrible loss for the association and for collectors everywhere. The ANA’s collection provides a window into the history of society, culture and economics from the ancient world to the present day. Because of Mr. Yeager’s actions, significant cultural items will not be available to museum visitors, researchers and other interested groups.” ¦