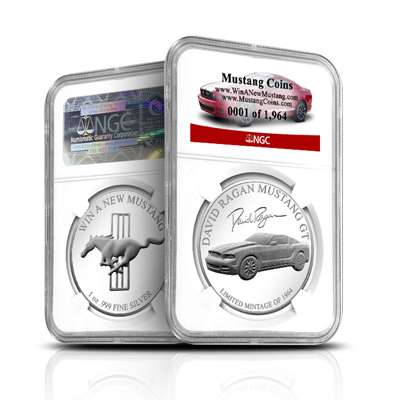 As Ford celebrates the 50th anniversary of the Mustang, a new silver collector medal featuring the classic American sports car is for sale online.

The release comes as CapComm is giving away a Mustang GT signed by Ragan, a NASCAR Sprint Cup driver who drives the No. 34 car.

On the medal's obverse is a Mustang GT framed by the signature of Ragan and the inscriptions DAVID RAGAN MUSTANG GT and LIMITED MINTAGE OF 1964.

The medal released on Sept. 8 is priced at $100. Mintage of the medal is limited to 1,964, a number that pays homage to the year the first Mustang was produced.

Each medal comes with 10 free entries into the drawing for the Ragan Mustang, which will take place on Nov. 16 at the Ford EcoBoost 400 in Homestead, Fla., the final NASCAR race of the year.

"In commemoration of this, each 2015 model will be adorned with a badge on the instrument panel that includes the galloping pony logo and the words 'Mustang – Since 1964,’ ” an Aug. 28 Cars & Parts article by Eric Kaminsky reads.

The silver Mustang medals will begin shipping in early October, according to the Provident website.