For sharp eyes only 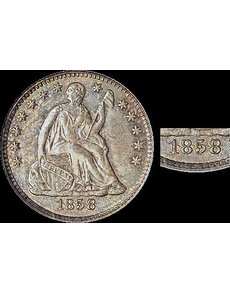 The date on this 1858 Seated Liberty half dime had its digits first punched into the die upside down, then punched in correctly. Evidence of the upside down digits from the first punching is still visible.

In an earlier column, I said that “acres of diamonds” await sharp-eyed observers who seek out well-struck dates and Mint marks of Indian Head 5-cent coins, Barber and Seated Liberty silver coins, and many other coins.

In the few series where sharpness is evaluated — full steps on certain Jefferson 5-cent coins, full bands on Winged Liberty Head dimes, full heads on Standing Liberty quarter dollars, and full bell lines on Franklin half dollars — sharp coins can be worth much more than typical strikes.

Beyond sharpness of strike, other unexplored or unobserved details can add rarity and value to an item, though sometimes temporarily.

For example, during the Civil War, hundreds of different varieties of paper scrip notes of 1-, 5-, 10-, 25- and 50-cent values were privately printed in an era during which coins were widely hoarded. Most have never been cataloged.

Take the states of New York and Massachusetts. Today the scrip notes of these states are apt to be very inexpensive. That will change dramatically if in the future certain notes are found to be rarities.

Rarities do not always stay rare. A case in point is the 1938-D/S 5-cent coin. This variety was completely unknown until 1962 when two Jamestown, N.Y., dealers, C.G. Langworthy and Robert Kerr, discovered it, a coin with the Mint mark D sharply punched over a previous Mint mark S, and contacted Coin World about it. Editor Margo Russell called upon me to authenticate this startling issue, a coin that actually appeared to have two distinct and different Mint marks, both a D and an S! Excitement prevailed, collections and rolls were searched, and within a few years it was determined that at least several thousand Mint State coins exist.

In my Feb. 2, 1966, Coin World column, I published information and a picture of a marvelous new discovery found by Warren Olson — an 1858 Seated Liberty half dime with the date first punched in the die upside down, then corrected. Owners of 1858 half dimes checked the dates, and within the year several dozen had been found. Jess Patrick, then in Detroit, wrote to say he had discovered the variety in July 1963, but had not reported it. Probably more than 100 are known, mostly in worn grades, but likely a dozen or so exist in Mint State.

On the other hand, some new rarities remain rare. The 1870-S Seated Liberty half dime publicized by Ed Milas in the late 1970s and later consigned to Bowers and Merena Galleries’ September 1985 auction remains unique.