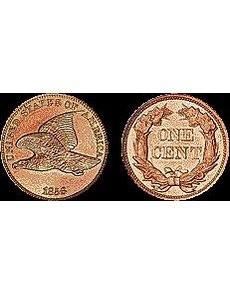 When I first discovered the world’s greatest hobby in 1952 and in 1953 went on to become a part-time dealer, everybody but everybody had a Whitman folder for Flying Eagle and Indian Head cents. I decided to form a collection of Proof Indian Head cents, starting with the dates from 1879 to 1909, which cost about $2.50 to $3.50 each.

By 1954, I decided that the ultimate in numismatic satisfaction would be to own an 1856 Flying Eagle cent. This rarity was the stuff of which dreams are made. It was a year or two into the hobby before I was able to see one — a lovely Proof in a National album page brought for display to the Wilkes-Barre (Pa.) Coin Club by Albert Thomas. He allowed me to push it out of its space, sandwiched between two clear slides, and actually hold it! How exciting.

I figured that if any dealer had a nice 1856 Flying Eagle cent for sale it would be Stack’s in New York City. The time was early autumn 1954. Stack’s reigned supreme in the world of rare coin sales and auctions after the recent surprise dissolution of their most dynamic competitor — the Numismatic Gallery conducted by Abe Kosoff and Abner Kreisberg.

I telephoned (using the same number in service today, in 2012, except then there were no area codes or direct dialing). I was connected to Harvey Stack, son of Morton Stack who, with brother Joseph Stack, had founded the company in 1933. In retrospect it might seem that a worse year to start a coin dealership could not be imagined — what with the Depression and bank failures. However, by dint of hard work the brothers did well, in fact prospered. Their first auction was held in 1935, and in 1936 they became official distributors for the Arkansas-Robinson commemorative half dollars, the first of several such appointments.

Harvey asked what I had in mind, and I asked if he had a Proof 1856 Flying Eagle cent for sale. The reply went something like this:

“I have a nice Proof, but I have to get $310 for it. I know this is not a ‘dealer’s price,’ but one just sold for a lot of money in our Anderson-Dupont Sale, and I paid a lot when I bought it.”

Although I have a sharp memory, I don’t recall whether I leaped to pay this very strong price or waited for another opportunity.

In time I filled out my collection of Proof Flying Eagle and Indian cents, except for the 1864 with L on the ribbon cent.