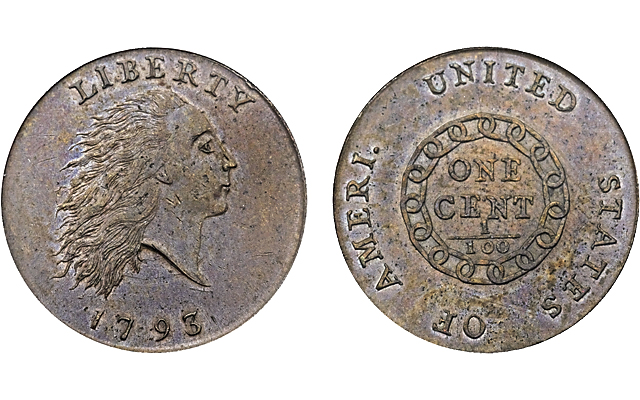 The coin is one of 636 lots to be offered June 23 in New York by Heritage Auctions in its sale dedicated to Gardner Collection coins.

The sale is scheduled to be held at the Ukrainian Institute of America at the Fletcher-Sinclair Mansion, 2 E. 79th St., in New York City.

Graded Mint State 63 brown by Professional Coin Grading Service, the Sheldon 1 cent variety is recognizable by the word "America" being abbreviated to AMERI. on the reverse.

Gardner’s coin has appeared multiple times at auction, the first being, according to Heritage, in William H. Strobridge’s 1873 sale of the George Seavey Collection.

The first United States large cents struck at the Philadelphia Mint for general circulation were 1793 Flowing Hair, Chain cents, of which a number of varieties were produced that are attributed by Sheldon numbers.

The first coins produced were those bearing the abbreviated inscription. Later strikes had AMERICA fully spelled out.