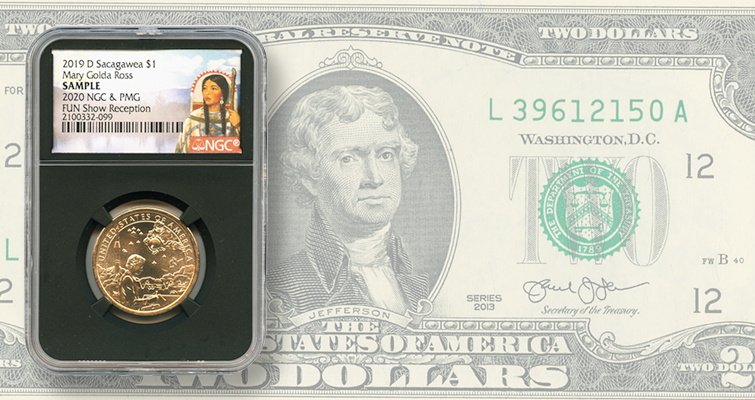 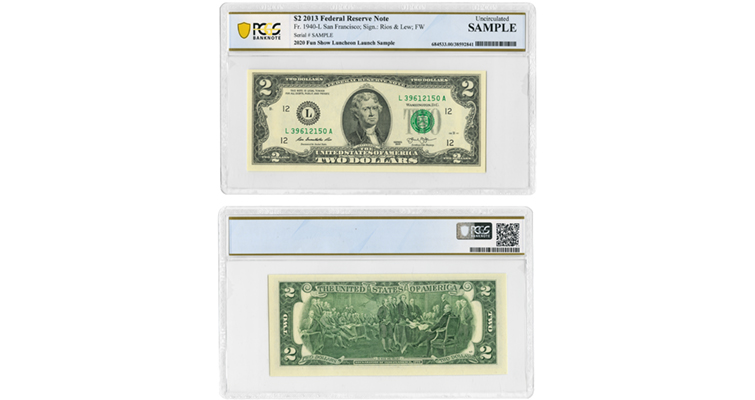 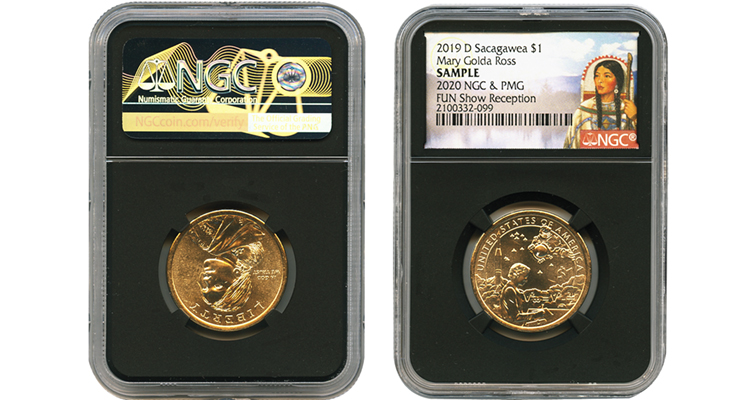 Attendees at the Jan. 10 NGC reception received a 2019-D Native American dollar in a sample encapsulation. 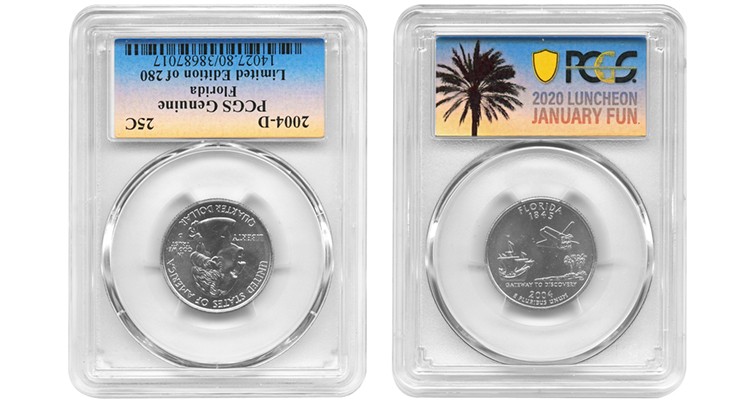 The 2020 convention circuit got off to a start Jan. 9 to 12 with the bellwether Florida United Numismatists Convention in Orlando.

The U.S. Mint introduced sales in conjunction with the show Jan. 9 for the Proof 2020-W American Eagle silver dollar. The Mint recorded sales of thousands of the coins, which were offered individually as well as in 40-coin bulk discount packs without the full packaging and in the 2020 Congratulations set.

A handful of dealers Jan. 11 and 12 were able to offer the year’s first 2020 American Eagle silver bullion coins that were ordered Jan. 6 by the U.S. Mint’s authorized purchasers and delivered to the show.

The U.S. Mint used its participation at the show as an opportunity to launch sales of its Proof 2020-W American Eagle silver dollar. The Mint plans to launch sales of a new numismatic product at each of the shows where it holds a booth.

Collectors attending the FUN show were able to add to their collections of United States and world coins and paper money, ancients, medallic art, precious metals and more.

The schedule of numismatic programs was extensive as was the number of specialty club meetings, with some drawing significant participation.

At its Jan. 10 banquet, the National Silver Dollar Roundtable recognized contributions to the hobby by awarding its Woman of the Year, Man of the Year and Lifetime Achievement Awards.

Former Coin World Editor Beth Deisher was named the NSDR Woman of the Year for her contributions in helping to lead the fight against counterfeit coins infiltrating the hobby. Deisher stepped down earlier in 2019 as director of the Anti-Counterfeiting Task Force after spending its first two years at the helm. Originally under the umbrella of the Industry Council of Tangible Assets, the task force is now under the purview of the Anti-Counterfeiting Educational Foundation.

The NSDR’s Man of the Year is Jeff Garrett, president of Mid-American Rare Coin Galleries. He is the author or co-author of several numismatic references, and a past president of the PNG and American Numismatic Association.

PCGS and NGC staged a luncheon and evening reception, respectively, Jan. 10, for set registry participants and other invited guests.

Attendees at the NGC reception received a 2019-D Native American dollar in an NGC sample encapsulation.

At the Jan. 11 meeting of Early American Coppers, participants learned that a highlight of the EAC’s April 30 to May 3 convention at the Pittsburgh Marriott City Center in Pennsylvania will include a visit to the Carnegie Museums of Pittsburgh’s collection of duplicate large cents from the collection of George H. Clapp.

Clapp’s core collection of large cents was donated to the American Numismatic Society in the 1940s, with the duplicates going to the Pittsburgh museum. Details on the EAC convention can be found online at www.EACS.org.

The Sunken Treasure Literature Society, at its Jan. 10 meeting, in addition to discussing new books published in 2019 on wrecks, also discussed Cuba’s connection to Spain’s silver fleet that sunk off the east coast of Florida, and an upcoming trip planned by the 1715 Fleet Society to Havana, Cuba, for the 3rd Annual International Conference.

The conference will feature noted historians and shipwreck experts as speakers. 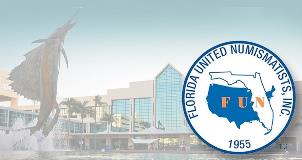 Summer vacation doesn't have to mean leaving collecting fun behind 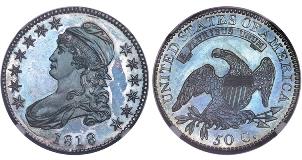