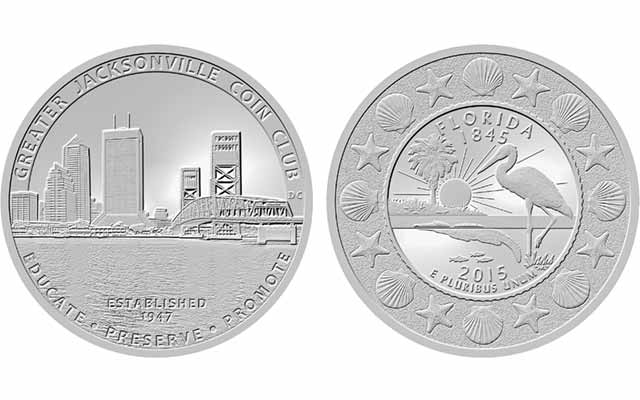 As the Greater Jacksonville Coin Club in Florida nears its 70th anniversary in 2017, it has issued this medal to commemorate recent accomplishments. Images courtesy of Dan Carr. 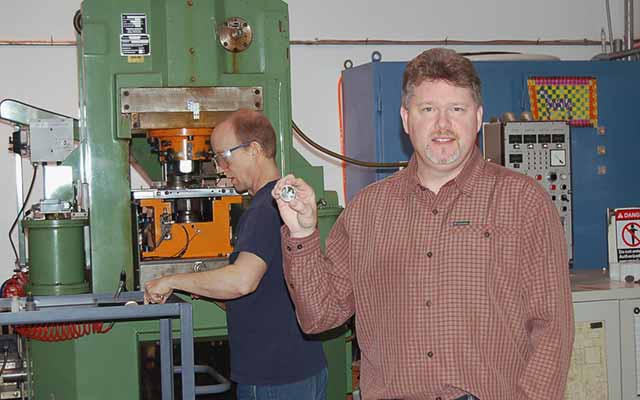 Established in 1947, with an American Numismatic Association Lifetime Club Membership, the Greater Jacksonville Coin Club in Florida will be celebrating its 70th Anniversary in 2017.

In anticipation of this milestone, the GJCC adopted and modified a logo chosen from submissions to a club design contest that I initiated in 2013 as club president. This was followed up by a motto contest in 2014 by current President Tom Bobbitt. To commemorate the culmination of these two projects, and also to recognize the club’s growth to more than 250 members in 2014, the GJCC is proud to release its first GJCC medal.

We wanted the club’s inaugural medal to be something special, and felt that Daniel Carr’s Moonlight Mint could deliver just that. Dan’s design skills, attention to detail and ability to produce coins and medals from start to finish himself (using a Grabener press previously owned by the U.S. Mint) delivered a high-quality medal with which we were more than thrilled: he has exceeded our high expectations. I don’t think anyone else could have captured the Jacksonville skyline in such detail as he did; there is even reflection in the water.

The obverse of the medal features a quintessential skyline of Jacksonville, Fla., with the club name, ESTABLISHED 1947, along with the new club motto of EDUCATE ? PRESERVE ? PROMOTE, adopted to convey the educational mission statement of the club. For the reverse, Carr’s unused State quarter dollar design submitted to the state of Florida design contest appears in the center of the design. As one of the top 10 designs in that contest it was conveyed to the U.S. Mint in nongraphic narrative form for consideration.

The GJCC medal was minted on April 13, 2015. The initial offering was made to club members at the May 11 meeting, then offered for sale at our annual coin show the weekend of May 29. All proceeds will benefit the club by continuing to educate the public, to preserve and promote the hobby of coin collecting. Remaining medals are now being offered at gjcc.net while supply lasts. You may also pick one up at the GJCC Club Membership table at Florida United Numismatists summer convention in Orlando in July.

All were graded by ANACS and encapsulated using Daniel Carr’s Custom Moonlight Mint Label; each label was personally signed by Daniel Carr.

Matt Adams is a former president of the Greater Jacksonville Coin Club in Florida.