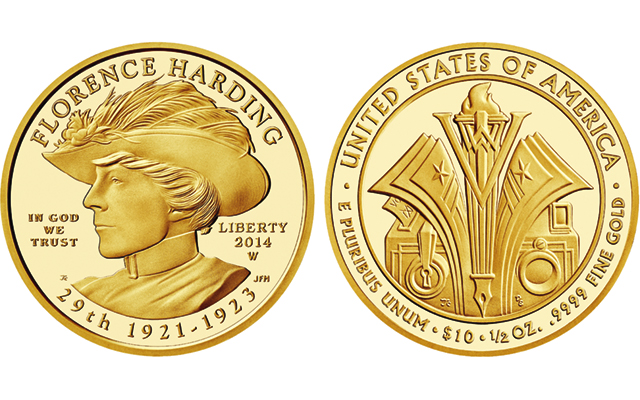 Collectors began ordering at noon Eastern Time July 10 from the U.S. Mint the Proof and Uncirculated versions of the 2014-W Florence Harding, $10 gold coins in the First Spouse program. Illustrated is the Proof version.

The opening price for the Proof version is $865 and $845 for the Uncirculated coin. A fee of $4.95 will be added to all domestic orders for shipping and handling.

The maximum mintage will be limited to 10,000 units across both finishes. Customer demand will determine the ratio of Proof to Uncirculated coins produced within the total maximum mintage.

Pricing is determined according to the United States Mint’s pricing structure for gold coins.

Harding championed the cause of World War I veterans, symbolized in the reverse design by the initials WWV, which form a torch, transformed into a pen at its base to represent her extensive correspondence with veterans, their spouses, and widows.

The camera represents her orchestration of photo opportunities supporting her husband’s campaign. The ballot box represents her distinction as the first first lady to cast a vote for a presidential candidate, her husband, Warren G. Harding.