Flip side of a famous design 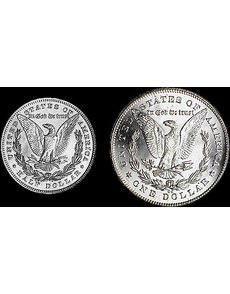 Morgan’s 1877 pattern half dollar reverse is shown above, left, beside a Carson City Mint example of his 1878 regular-issue silver dollar reverse. The design was originally planned for the lower denomination.

In 1876, U.S. Mint Director Dr. Henry R. Linderman contemplated the appearance of current silver coinage. As much as we numismatists might love the Seated Liberty design today, by 1876 it had been in use for 40 years and was considered trite. However, for a good span of that era, such pieces were not seen in circulation.

The public had hoarded silver coins since the spring of 1862, when the outcome of the Civil War was uncertain and legal tender notes were issued by the government and had no backing in gold or silver coins. It was hoped in April 1865 when the war ended that coins would soon return to commerce. However, not until after April 20, 1876, were the silver coins again on par with paper, so that massive quantities of long-stored silver entered commerce.

Anticipating the future with a strong need for silver coins once again, Linderman felt that Chief Engraver William Barber and his son, Charles, an assistant engraver, lacked high-level artistic talent to create new designs. He persuaded George T. Morgan, a highly respected young British engraver, to come to America for this purpose.

In 1877, Morgan, the Barbers and Anthony Paquet prepared a series of pattern half dollars of varied motifs.

In early 1878 came a hurry-up call for a new silver dollar design to make coins authorized under the Bland-Allison Act of Feb. 28. One of Morgan’s 1877 patterns was modified for the dollar. On this reverse is a very attractive eagle, one of the finest in coinage, with wings uplifted and with minute detail to the feathers. Above the eagle’s head is the inscription IN GOD WE TRUST in Old English letters, interesting as this font appears nowhere else on either side of the coin.

The eagle clutches an olive branch and three arrows. Earlier patterns had just three leaves on the branch, but in final form there are nine. The arrow feathers have parallel edges in the first circulating dollars, but were changed later, so that the top-most feather is at an angle, for some unexplained reason. Below the eagle and to the left and right is an olive wreath with berries. Around the border are UNITED STATES OF AMERICA and ONE DOLLAR. Morgan’s initial M appears on the wreath bow, unusual as his initial also appears on the obverse — a duality without precedent. The Mint mark, if any, was placed below the eagle.