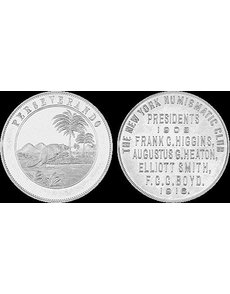 The “Five Presidents” medal, produced in 1916, reflects numismatist Thomas L. Elder’s deep interest in the American Revolution and his devotion to the New York Numismatic Club, which he helped found.

Collectors often think of commemorative medals in terms of a single subject — tribute to an artist or military hero, a royal coronation, inauguration of a president or an important anniversary of some significant event.

Experienced medal collectors soon learn that medals in their collections may relate to two, three or more subjects. One such is the 38-millimeter 1916 medal released by professional numismatist Thomas L. Elder (born 1874, died 1948) honoring the New York Numismatic Club, which he helped organize in 1908 and 1909.

Elder was one of America’s leading dealers, who presented a decades-long stream of high quality and collectible auctions, and sold ancient, world, and American coins and medals at retail.

He was also famous for his many strong and freely expressed opinions on numismatics and numismatists, temperance, sound money, politics and current events.

Elder fastened on medals as his favorite medium of expression, issuing a steady stream of them from about 1903 until 1939. These ranged from celebrations of the life of President Abraham Lincoln to savagely satirical forays into the politics of the American Numismatic Association and American presidential elections.

Elder’s medals were definitively cataloged by numismatist Thomas K. DeLorey in the ANA journal, The Numismatist, in 1980.

The “Five Presidents” medal reflects Elder’s deep interest in the American Revolution with an obverse presenting an emblem used on Continental paper currency, showing a beaver — representing the 13 Colonies — chewing through the trunk of a tall palm tree, which European artists thought emblematic of America. The Latin PERSEVERANDO translates to “Persevering.”

The reverse is devoted to the NYNC, another of Elder’s favorite subjects. He listed four Club presidents: founder Frank C. Higgins, artist-cataloger and Mint mark pioneer Augustus G. Heaton, collector Elliott Smith, and Union News Co. mogul and mega-collector F.C.C. Boyd. For some unknown reason, this medal is called “Five Presidents,” though only four are listed! Elder himself never served in that office but always enjoyed ballyhooing the club.

Despite his near lifetime as a New York City resident, Elder had the Chicago firm of Charles Hanson strike most of his medals. This issue, DeLorey 90, was produced in silver, German silver, brass, oreide, aluminum, lead and red fiber.

Shown is the aluminum version. Like most Elder issues, it is relatively scarce and difficult to find in 2014, but is of lasting interest to collectors thanks to its multiple subjects.