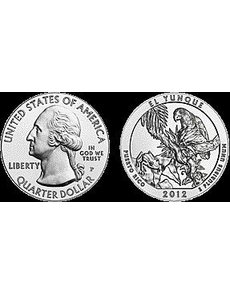 According to a U.S. Mint notice dated May 18 but not posted on the Federal Register until May 23, the starting price of each coin will be $204.95. The price of the 5-ounce coins may fluctuate weekly depending on the London PM fix in the spot price of silver.

The coin pricing is based on a pricing grid for precious metals numismatic products posted on the U.S. Mint website at www.usmint.gov.

The maximum authorization for the coins is 25,000, with no household ordering restrictions. The previous household ordering limit of one per household during the first week of sales was lifted with the release of the 2011-P Chickasaw National Recreation Area 5-ounce silver coin.

Although both the Uncirculated and bullion versions of the 5-ounce silver America the Beautiful coins are struck at the Philadelphia Mint, only the Uncirculated coins bear the P Mint mark on the common George Washington obverse.

The 2012-P El Yunque National Forest 5-ounce silver coin (Commonwealth of Puerto Rico) may be ordered by calling 800-872-6468, or visiting the U.S. Mint website at www.usmint.gov.

Release of the 5-ounce bullion version to authorized purchasers is expected soon. The Mint imposes no maximum mintages on the bullion versions, which are struck to demand, according to U.S. Mint spokesman Michael White.

The 5-ounce bullion versions are sold through the same network of authorized purchasers approved to buy and distribute for resale into the secondary market the U.S. Mint’s other bullion coins — American Buffalo gold coins and American Eagle gold and silver bullion coins.

The bullion version of the 5-ounce coin is produced for investors, while the Uncirculated version is aimed at collectors.

The Uncirculated 5-ounce coins are struck on the same silver blanks as the bullion version. The Uncirculated coins, however, receive a post-strike treatment resulting in a different finish.

The America the Beautiful coin program authorizes coins bearing reverse designs representing 56 national parks and historic sites in the 50 states, the District of Columbia and the five U.S. territories.