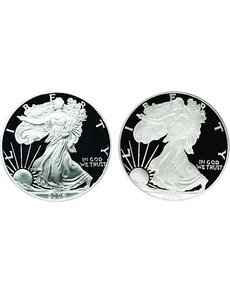 These Proof 2006-W American Eagle silver dollars, both graded Proof 70 deep cameo by PCGS, visually look the same, the difference being that the “First Strike,” above left, was released in the first 30 days and the other lacked such documentation when it was submitted to the grading service.

Professional Coin Grading Service and Numismatic Guaranty Corp. have programs for coins delivered by the U.S. Mint in the 30-day period following the initial sales date of a new product.

By virtue of population numbers alone, early release coins generally are not scarcer than their later-issued brethren. Take for example the Proof 2006-W American Eagle silver dollar. As of mid-June, PCGS graded 7,285 examples under its normal program and 7,716 pieces under its First Strike program.

The early release programs take into account only when a coin was shipped from the U.S. Mint, not when it was minted.

The programs were first developed by the grading services in 2005. The “First Strikes” are visually imperceptible from their later-released counterparts.

Grading services are in the business of creating products that collectors want — and if a collector wants two examples of a given issue to represent both the “First Strikes” and the “non-First Strikes,” that creates demand, especially among registry set collectors.

Yet, telemarketers can use the designation to justify heavy premiums that may not actually exist, saying that the coins are among the “first struck from the dies” or that quality deteriorates over the year as the Mint struggles to meet demand. Neither of these statements is true.

The U.S. Mint issued a consumer advisory on July 11, 2006, to clarify concerns on “First Strike” coins.

The case went to mediation and NGC established a $650,000 settlement fund to be used to educate the public about coins and terminology. A similar lawsuit was filed against PCGS, which settled the matter and continues to use “First Strike” terminology.

Ultimately, collectors should use caution when paying large premiums for this kind of coin.