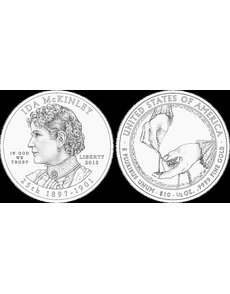 The on-sale date for the Ida McKinley coins, struck in Proof and Uncirculated versions at the West Point Mint with the W Mint mark, is Nov. 14. The Edith Roosevelt coins will go on sale Nov. 21, and the Helen Taft coins on Dec. 2.

The on-sale dates for the Ellen Wilson and Edith Wilson First Spouse gold coins are to be determined.

Each of the First Spouse coins is composed of a half-ounce of .9999 fine gold.

Also being produced and offered at $6.95 each will be 1.325-inch bronze First Spouse medals. Details on the coins and medals programs can be obtained at www.usmint.gov.

The 2013 mintage limits for the gold coins are down 3,000 coins for each of the First Spouse releases from 2012 levels.

The mintage limit for the 2013 First Spouse gold coins is 10,000 coins combined in Proof and Uncirculated versions for each of the five issues. The ratio of Proof to Uncirculated coins will be determined by customer demand, according to United States Mint officials.

Pricing of the First Spouse gold coins is determined by the United States Mint’s pricing policy, whereby prices are adjusted based upon weekly average gold prices from the London Fix. The adjustable pricing reflects the market value of the gold bullion that the coins contain. The average is calculated using the prices from the Thursday A.M. London Fix through the following Wednesday A.M. Fix.

Pricing as of Oct. 23 for the 2012 First Spouse coins still available from the Mint is $840 for the Proof versions and $820 for the Uncirculated coins.

Seven of the eight 2012 versions remain available, with only the Proof Alice Paul coin considered sold out. ¦