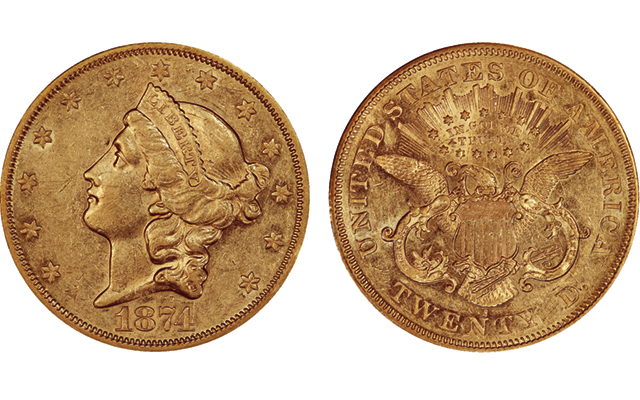 The first coin sold from the Saddle Ridge Hoard of U.S. gold coins brought $15,000 at a fundraising event May 27 in San Francisco to benefit the Old Mint and establish an American Money and Gold Rush Museum.

The coin is one of 1,427 gold coins from 1847 to 1894 that a couple unearthed in February 2013 after finding them on their northern California property. The coins were discovered secreted inside eight metal canisters.

The couple donated the 1874-S double eagle for the fundraising efforts.

Most of the coins from the hoard were being offered at fixed prices beginning at midnight Eastern Time May 27 simultaneously on Amazon.com and Kagins.com. Kagins in Tiburon, Calif., was contracted by the couple to market the coins.

Not all of the coins discovered were being offered for public sale, according to David McCarthy, senior numismatist and researcher for Kagin's. McCarthy said the couple retained an undisclosed number of the coins.