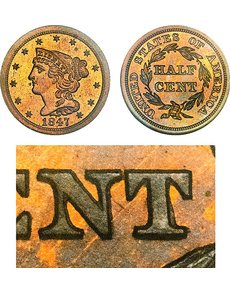 A First Restrike Proof 1847 Coronet half cent, one of two confirmed, is being offered in Heritage Numismatic Auctions’ Sept. 8 to 11 auction in Long Beach, Calif. The example being offered was last offered for sale at public auction nearly four decades ago.

One of two known First Restrike Proof 1847 Coronet half cents will be offered at auction by Heritage Numismatic Auctions as part of its Sept. 8 to 11 sale scheduled in Long Beach, Calif.

The number of surviving pieces from the 19 believed struck is uncertain. Definitive pedigrees or provenance suggest possibly only two survive. A third example may also exist, though its provenance is uncertain.

One example whose provenance is proven is held by Donald Groves Partrick, a former president of the American Numismatic Society, who has held his example for nearly four decades.

The second example, graded Proof 63 by Numismatic Guaranty Corp., was last sold at public auction in the early 1970s by Kagin’s. The same piece is being offered by Heritage at its Long Beach auction.

Walter Breen in his Encyclopedia of United States and Colonial Proof Coins 1722-1977, and revised 1989 edition, suggests three examples exist, although one reference may duplicate one of the two pieces whose pedigrees can be definitively traced.

In his Encyclopedia of United States Half Cents 1793-1857, Breen states, “For long, the existence of this variety was controversial,” without explaining the controversy.

“It is still the rarest of all die combinations among the Proof-only dates, being rarer than the 1831 or 1836 with small berries, or the 1852 with large berries,” Breen wrote in his half cent reference.

In his Proof coin reference, Breen writes that the restrikes represented pieces under an umbrella “more or less associated with regular designs, but now known to have been specially made, in the year of date or some later year, not for legitimate pattern or experimental purposes, nor as part of the regular yearly proof sets, not as true transitional proposed issues, but for purposes of surreptitious sale on behalf of venal employees in the Coiner’s Department.”

Numismatists identify two categories of Proof half cents: the “Originals,” struck for collector sales in the years in which the coins are dated, and the “Restrikes,” struck decades after the Original coins in order to meet continued collector demand. The Restrikes are further categorized as First Restrikes and Second Restrikes, the two subcategories distinguished by the periods during which they were struck.

Proof half cents were struck from 1831 to 1836 and again from 1840 through 1857 inclusive, for sale to the growing number of collectors in the United States. Half cents were also struck for circulation, though not annually, during that period. Production for 11 of those years — 1836, 1840 to 1848 inclusive, and 1852 — were of Proof-only strikes.

According to the Heritage auction lot description, the Philadelphia Mint struck the First Restrike pieces in the mid-1850s, perhaps 1856 or 1857, and produced the Second Restrike pieces from 1858 to 1860, or possibly later.

Various diagnostic points have been identified to distinguish Originals from the Restrikes, and to distinguish between the two restrike subcategories. Among the important characteristics used in identifying a particular coin’s status are the berries in the wreath on the reverse and the presence or lack of doubling on the letters of cent.

Variations among the letters on the reverse are also used as diagnostics.

First Restrike half cents have the right upright of the t in cent doubled, while the Second Restrikes have a normal t but clearly visible die file lines over the letters rica in america. Original Proofs bear no doubling in the lettering of cent.