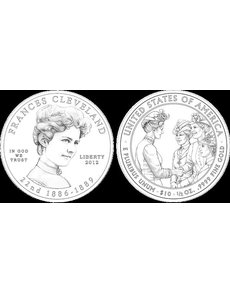 Collectors were to have the opportunity to begin ordering the first of two 2012-W Frances Cleveland, First Spouse gold $10 coins at noon Eastern Time Nov. 15.

Sales by the United States Mint of the first of the two different 2012-W First Spouse half-ounce gold $10 coins for Frances Cleveland were scheduled to begin at noon Nov. 15.

Cleveland will also get a second coin, because her husband, President Grover Cleveland, served two nonconsecutive terms in the office. The coin going on sale Nov. 15 marks Mrs. Cleveland’s service as first lady during the first term of President Cleveland.

The Alice Paul, First Spouse gold $10 coin was put on sale beginning at noon Oct. 12. Paul, a leading strategist in the suffrage movement, was born during President Chester Arthur’s administration.

A provision in the Presidential $1 Coin Act of 2005 specified the use of a likeness of Paul since Arthur’s wife, Ellen, died before he took office. Paul’s depiction is in contrast to the First Spouse coins for all other presidents who were unmarried or widowed during their term in office. Those other coins depict on their obverse a Liberty design based on a contemporary coin design and have a reverse design marking the president’s accomplishments.

Mint officials had not announced a release date for the Caroline Harrison coin or the Frances Cleveland, Second Term coin as of Nov. 9.

The 2012 releases have a maximum combined authorization for each coin in Proof and Uncirculated versions of 13,000 coins.

Pricing for the .9167 fine gold First Spouse coins is subject to the U.S. Mint’s pricing grid implemented in January 2009.