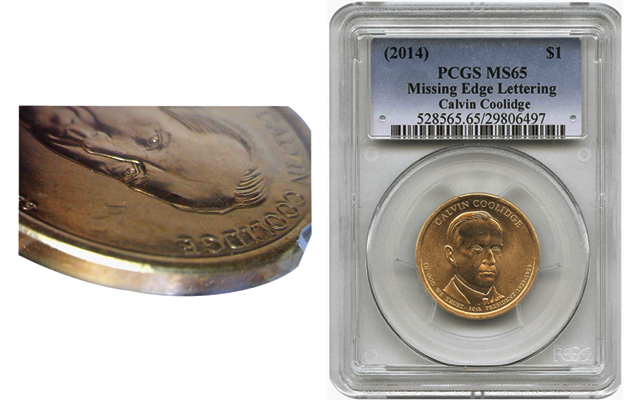 A circulation-quality 2014 Calvin Coolidge Presidential dollar missing its edge devices was reported May 30.

It is the first circulation-quality Presidential dollar since the 2012 Grover Cleveland, First Term coins from the Philadelphia Mint to have missing edge lettering reported, according to error specialist Fred Weinberg.

Rodney Levingston from South Park Coins in Forney, Texas, said May 30 that the 2014 Calvin Coolidge dollar missing its edge devices was found May 14 in a 25-coin roll of Denver Mint strikes specially wrapped on behalf of the U.S. Mint and sold to the public.

Levingston said he discovered the error Calvin Coolidge dollar while filling an order requiring four of the 2014-D dollars. One of the dollars removed from the roll was missing its edge devices, Levingston said. The remaining coins in the roll all had their edge inscriptions.

Prices for the various Presidential dollars missing the edge inscriptions vary widely (dependant on such factors as rarity and, maybe more importantly, current demand). The 2007 Washington coins (the most common one) are priced at well below $100. A 2013 auction by Ira and Larry Goldberg Auctioneers offering many different pieces saw some common pieces (for Martin Van Buren and James Madison) selling for less than $60.

The results from the Goldberg auction also showed how much the market for some of the error coins has fallen as more examples are discovered. As noted in Coin World’s Nov. 11, 2013, Market Analysis: “The lot description for lot 1732, a 2007 Thomas Jefferson dollar graded PCGS Mint State 66, told a cautionary tale, noting that the issue is ‘Somewhat rare due to a large number of previous buyers who paid as much as $30,000 and now do not want to sell at a major loss.’ Estimated at $250 to $300, it realized $460.”

When introduced in 2007, the Presidential dollars bore the date, Mint mark, and the inscriptions IN GOD WE TRUST and E PLURIBUS UNUM on the edge rather than on the obverse or reverse faces.